Despite being Akshay Kumar’s highest grosser till date, it still isn’t the biggest hit of all time for Khiladi Kumar. Mohra and Rowdy Rathore were far bigger hits as far as return on investment was concerned. As the film has ended its run at the ticket window, the entire credit for the success goes to Akshay Kumar as he not just presented an unconventional yet basic subject like ‘Sanitation’ to the Indian audience, but also made it reach numbers which not many in the industry would be able to. 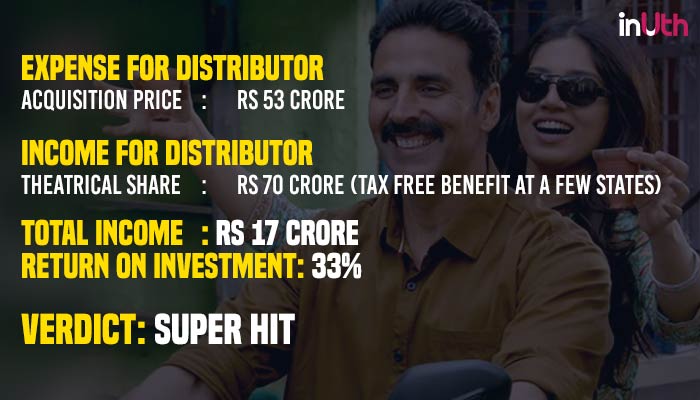 Toilet: Ek Prem Katha is the fifth consecutive hit for Akshay Kumar, and given his line up further, he seems to be on a roll. The actor will next be seen in Shankar’s sci-fi, 2.0 and the trade pundits are placing huge bets on the film already. Given the hype, star-cast, and scale, the film has all the chances to not just surpass the lifetime collections of Toilet: Ek Prem Katha, but also set new benchmarks at the Box Office by emerging as the biggest hit of all time for Akshay Kumar.

The teaser trailer of the film will be launched in November followed by a theatrical trailer in November and the same would give us an insight about how huge the film is going to be in the Hindi belts.

2.0 was initially slated to release during the Diwali 2017 weekend, however, extensive post production work resulted in a delay by 3 months and the film is now confirmed for a Republic Day 2018 release.

2.0 has been shot on a humongous budget of Rs 350 crore, however, if inside reports are to be believed, the film has shaped up very well and will be accepted by the audience across the globe.