By Wednesday morning (India time) the United States of America will have a new President. Democratic candidate Hilary Clinton and Republican Donald Trump will fight it out in 50 states. 130 million Americans will -cast their votes on Tuesday. Stay updated with all the buzz, swings and results as and when they come, with us.

1:15 pm: President elect Donald Trump praises Hillary Clinton for putting up a great fight and for serving America. He also promised that he would be President to the whole of the United States. He spoke about improving infrastructure and generating jobs. He also said: “We will tke care of our great veterans. We will double of growth and have the strongest economy anywhere in the world and at the same we will get along all countries that willing to get along with us.”

1 pm: Donald Trump wins Winconsin that has 10 electoral college votes. Taking his tally according to CNN:

According to Google, the tally stands something like this. He has already been declared the President. 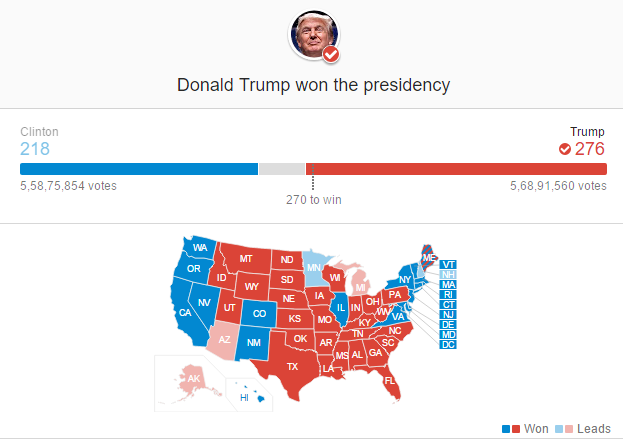 12 pm:  Donald Trump  is likely to take Pennsylvia, which is house to 20 electoral college seat. Campaign chair spoke at Hillary Clinton’s headquarters asking everyone to take break for the night. Hillary Clinton didn’t make a concession speech tonight. Says the elections are too close to take call today.

.@HillaryClinton is “not done yet” says her campaign manager John Podesta in New York #USelection2016 https://t.co/3DHqMeFm9R

11 am:  Donald Trump gets Iowa (6) and Hillary Clinton projected to win Nevada (6). Even as Further, the Republican Party on Tuesday won the House of Representatives in the US Elections, bagging 221 seats as compared to the Democrats’ tally of 163. Donáld Trump still strongly holds on to his lead.

Do you read something more than what’s obvious in this tweet by Clinton?

This team has so much to be proud of. Whatever happens tonight, thank you for everything. pic.twitter.com/x13iWOzILL

10 am : With a decisive win registered in Florida, Donald Trump gained a considerable lead over Hillary Clinton with 216/209. Let’s remind you both candidates need 270 electoral college votes to make it to White House. Meanwhile, according to CNN projections Clinton will win all the 12 electoral college seats of Washington DC. 16 Donald Trump carried Georgia with 16 electoral seats.

9: 30 am: Donald Trump wins the biggest swing state Florida (29 electoral votes). It was one of the most hardly fought states. He is also predicted to win the battleground state of North Carolina (15 electoral votes). Hillary Clinton won the massive state of California with 55 electoral seats. Clinton may also sweep Oregon (7 electoral seat) while Trump will take Idaho and Nebraska.

7:00 am: 91 per cent votes counted in Florida. It’s a neck to neck fight with a difference of less than 2 per cent in the vote cast. Florida has 29 electoral college votes.  New York Times is projecting that Trump might take the crucial battleground state.

6:30 am: Democrat Tammy Duckworth will win llinois’ Senate seat in a pickup for Dems, as per CNN projections.

6:00 am: Not surprisingly, West Virginia has been called for Donald Trump. This is a state where Hillary won every county in the state in the 2008 Democrat primary. He has also won Okhalama and Missisippi. 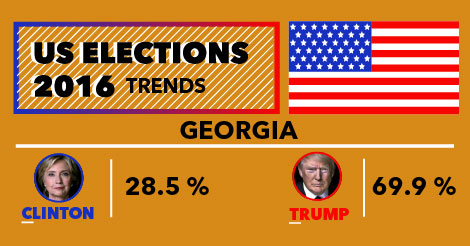 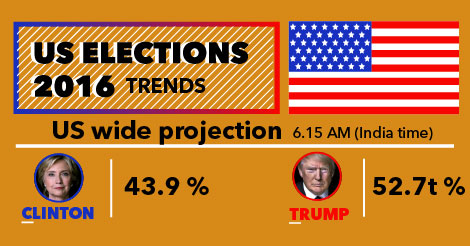 “Apprentice” star Omarosa has said that DonaldTrump has written both acceptance as well as concession speeches.

The North Carolina State Board of Elections has extended voting in Durham County in eight precincts.

5:00 am: As per the first exit poll by CNN, Donald Trump will win both Kentucky and Indiana and Hillary Clinton will bag Vermont. So far, no major upsets have been projected. 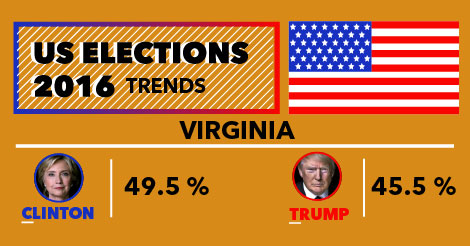 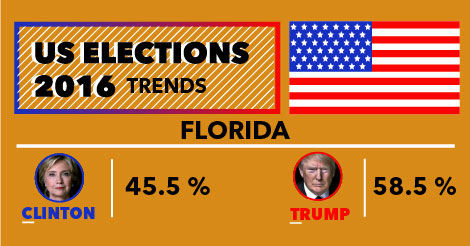 4:00 am: Voters are not much excited about this year’s presidential candidates. As per the CNN exit poll, only about four in 10 voters said they would be excited or optimistic about either Hillary Clinton or Donald Trump in the White House.

CNN also reported that 62% voters had made up their mind about who to vote for before September. Another 26% decided in either September or October. But only 12% decided over the past week or in the last few days.

Meanwhile, a nonprofit has gone to court in North Carolina asking for polls in Durham County to be kept open another 90 minutes, reports CNN.

On #ElectionDay voters in five states will decide on whether marijuana should be legal to use recreationally https://t.co/9RflYXD3FQ pic.twitter.com/mgIDwrjJPI

3:30 am Look how people are reacting after voting for the US polls

I have #cookiecake and #beer so I am ready for the election. #myvote

3:00 am Donald Trump urges people to vote. “Don’t let up, keep getting out to vote – this election is FAR FROM OVER! We are doing well but there is much time left. GO FLORIDA!”

There are reports of fraud in voting in Philadelphia. Clinton supporters have allegedly been caught on camera outside a polling station encouraging people to vote for the Democratic Party.

2:00 am Bengali language is also among the languages used during the US presidential debate. Not just Indians, a large strata of people from Bangladeshi origin have also become a part of the United States.

My 1st vote for President (voted for @nycmayor in 2013, year I became citizen)! Was extra-moved to see Bengali among the languages used. pic.twitter.com/4EXVNf9ucf

1:00 am The US electorate this year will be the country’s most racially and ethnically diverse ever, even more than when Barack Obama was fighting. Nearly one-in-three eligible voters (31%) are Hispanic, black, Asian or another racial or ethnic minority, up from 29% in 2012.

Rihanna wearing a shirt of a picture of herself wearing a Hillary Clinton shirt. She’s with HER! #ElectionDay pic.twitter.com/s81RLRUYdE

12:30 am Donald Trump met an unfriendly New York City when he showed up to vote. Trump, who was accompanied by his wife Melania and daughter Ivanka, was booed by a group of people outside PS 59 in Midtown Manhattan.

Scene outside PS 59 as Donald Trump arrives to vote for himself for the second time ever pic.twitter.com/u2ut5yjDss

11:30 pm Meanwhile, back in India Prime Minister Narendra Modi made a huge announcement by doing away with Rs 500 and Rs 1000. The announcement invited a lot of reactions with several people saluting PM for th grand move. We were caught up with the big news in India, but we are back now.

Here is the latest snapshot of the Electoral College map which tints towards Donald Trump. However, Clinton holds a clear advantage. 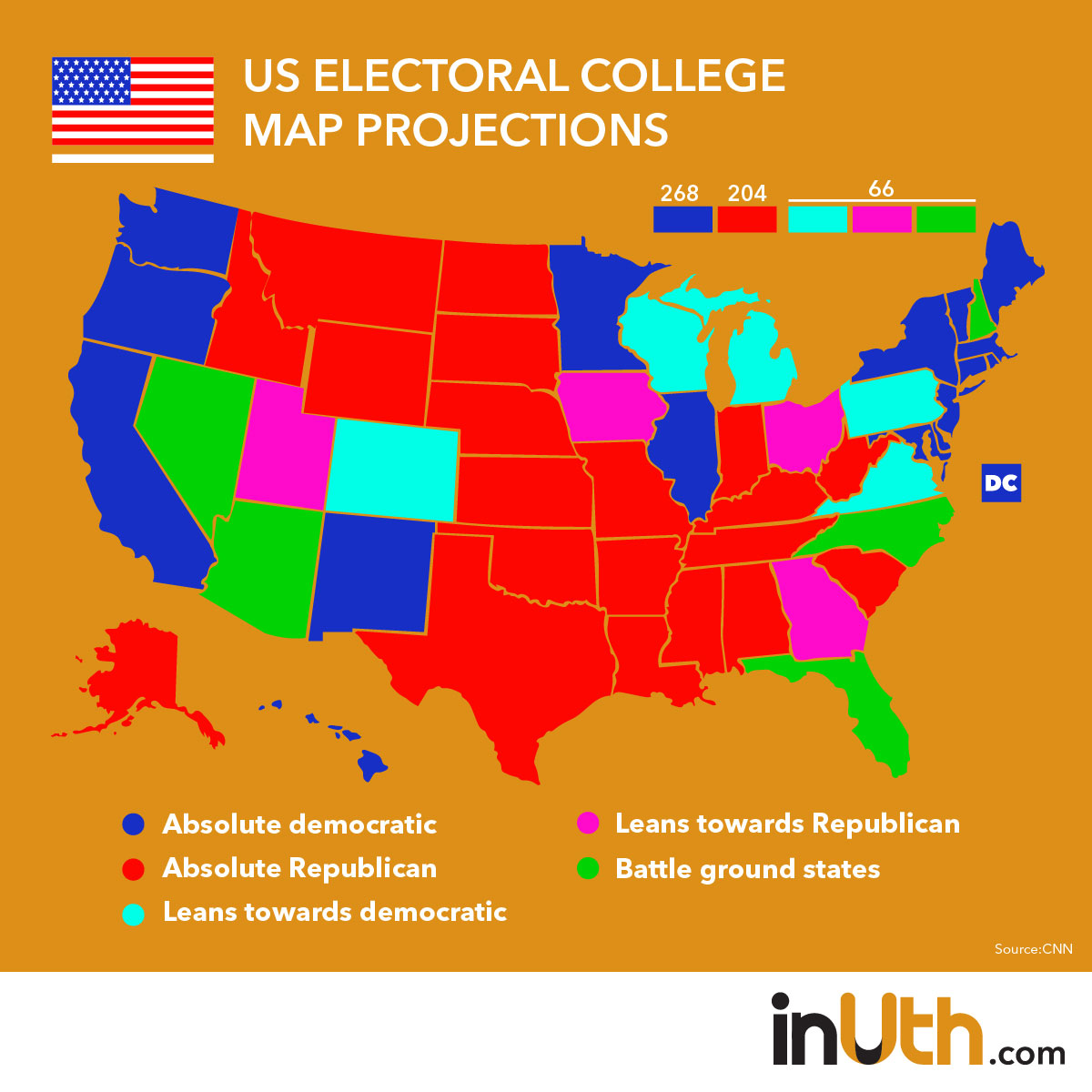 We need your vote. Go to the POLLS! Let’s continue this MOVEMENT! Find your poll location: https://t.co/VMUdvi1tx1 #ElectionDay #VoteTrump pic.twitter.com/9hdO88iLdE

Here’s something from Twitter. Democratic candidate for the post of Vice President Tim Cane,was defeated in the race to…..well, cast his vote.

I wanted to be first at my polling place, but 99-year-old Minerva Turpin beat me to it. Looks like I need to get used to being number two! pic.twitter.com/9YvWOjuKUe

Here’s the story of a young Hillary Clinton we fished from her Twitter feed.

7 pm: First Presidential votes has been counted in New Hamsphire. Hillary Clinton has won Dixville Notch. Clinton bagged four votes, while Donald Trump won two. Libertarian nominee Gary Johnson earned one vote. The tiny New Hampshire has a population of 12 people, according to Politico. It’s the one of three places which follows the tradition of voting at midnight on the election day.

6 pm: Of all the 538 electoral college votes, the winning candidate will at least need 270 votes to make it to the White House. According to CNN’s latest electoral map, Hillary Clinton has dropped below the half way mark with 268 votes.

Here’s a lowdown on the number of electoral college votes according to states and the swing states where the battle will go down to the wire: 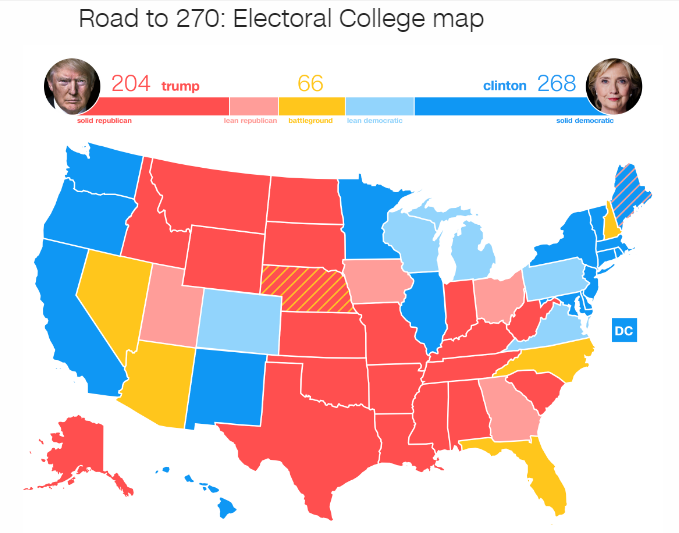 1 pm: As we wait for more updates, we leave you with this WSJ video that gives a glimpse of what to watch out for hour by hour.

12 noon: In sharp contrast to the fun and euphoria of Hillary Clinton’s last two rallies, Donald Trumps rallies was all business like. He ended his address with “Let’s make America great Again”.

You can watch his address in Michigan here:

Read More: Who will win the US Presidential Elections 2016? These astrologers try and predict

11:00 am: Voting begins in the United States. US is electing its 45 President. Election began early and the counting was on in three small towns in New Hampshire.

Polling begins for 2016 #US #PresidentialElection. 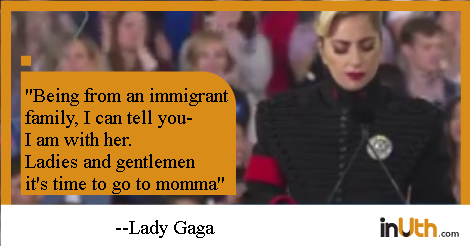 She also entralled the crowd with one of her most popular songs, ‘bad romance’. Clinton stuck to her message of “stronger together”.

8/11/15 –9:30 The possibility of an utterly racist, sexist and xenophobic man making it to the White House doesn’t seem completely outlandish at this point. According the latest update by The Guardian, posted 11 hours ago: “With just one day to go until the 2016 presidential election, Hillary Clinton’s support is at 46.8% while Donald Trump’s is at 44.3%.” One of the last campaign rallies by Clinton was fired up by the presence of the most loved First Lady of the US history Michelle Obama and the adorable President Barack Obama in Philadelphia, showed what is at stake for the Americans. Bill Clinton and Chelsea Clinton were present to support Hillary there. The big message at the rally was vote for a “big hearted, inclusive America”.

Read More: This is your easiest guide to understanding the complicated proces of US elections