Samsung Galaxy Note 8, the optimistic successor to the Korean electronic giant’s troubled tablet– Samsung Galaxy Note 7 will be launched at a special event in the New York City on August 23, 2017. Ahead of its launch, serial leaker Evan Blass has revealed full specifications of the upcoming device in all its glory. The leaked information not only includes specs but also the price of the device.

If Blass is to be believed, Samsung Galaxy Note 8 will look a lot similar to Galaxy S8 and Galaxy S8+ that were introduced in April this year. The body of Galaxy Note 8 is IP68 certified. The device comes with a 6.3-inch super AMOLED display and it is barely larger than Galaxy S8+ which came with a 6.2-inch display. As far as the dimensions are concerned, Galaxy Note 8 is 16.5mm long, 74.6mm wide and has 8.5mm thickness.

Just like Galaxy S8, Galaxy Note 8 will be powered by Samsung Exynos 8895 system on chip (SoC) globally. However, the US variant will be powered by Qualcomm’s Snapdragon 835 SoC in the US. Both the chips have been manufactured using the company’s 10nm FinFET fabrication process. Also, Galaxy Note 8 will sport 6 GB RAM with 64 GB internal memory that can be expanded using a memory card. 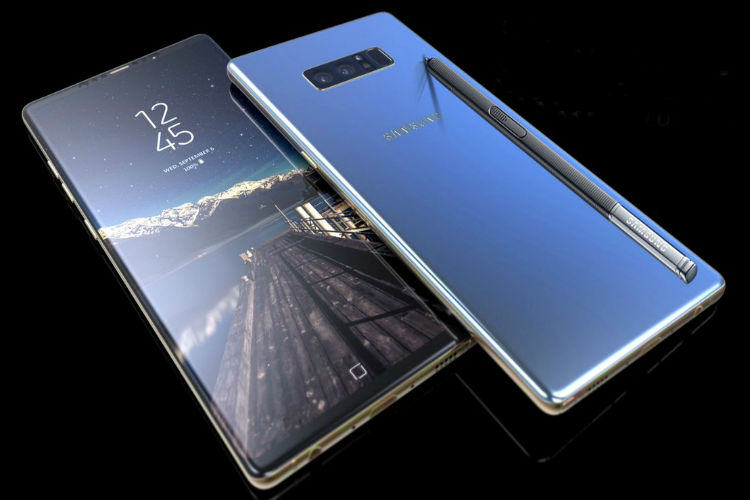 As far the camera is concerned, Samsung Galaxy Note 8 will feature 12 MP dual camera on the rear side. While the wide angle lens will sport f1.7 aperture along with dual-pixel auto focus, the telephoto lens will come with f2.4 aperture and 2x optical zoom. Both the lenses feature optical image stabilisation technology. The device also features an 8 MP front-facing camera with f1.7 autofocus aperture.

As far as battery is concerned, Galaxy Note 8 comes with 3,300 mAh battery. It will be available in four colour variants– Deep Sea Blue, Orchid Blue, Maple Gold and Midnight Black. The tablet is likely to be priced around €1,000 (Rs 75,000 approx).