Nokia 8 has witnessed multiple leaks in the past couple of weeks. Several leaks have effectively highlighted the features that the HMD Global’s upcoming smartphone could feature. And now fresh leaks showing Nokia 8 in a gaudy copper gold colour variant have surfaced on the social media. Apart from the colour, price and specification of Nokia 8 have also been highlighted once again.

The fresh leaks show Nokia 8 have significant bezels on the top and bottom of the phone along with capacitive buttons for navigation. Also, the fingerprint scanner has been integrated within the display. The highlight of the device seems to be the vertical dual camera, which is placed on the back side of the phone. The vertical camera has four holes– two for the camera, one for flash and one for the sensor. 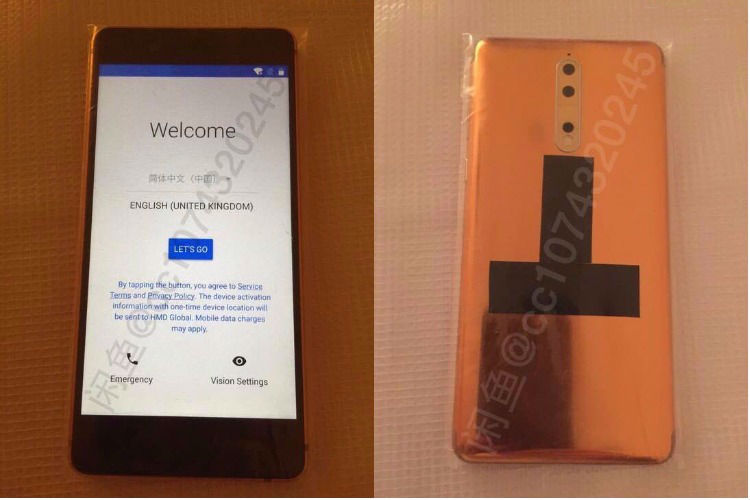 HMD Global is likely to pit Nokia 8 against the likes of OnePlus 5 in the affordable smartphone segment. The leaks show that Nokia 8 will be powered by Qualcomm Snapdragon 835 system on chip (SoC) and feature a 5.3-inch quad HD display along with dual-SIM support. The smartphone could feature 4 GB RAM along with 64 GB internal memory with expandable storage. The phone could sport 13 MP dual-lens rear camera with Carl – Zeiss optics along with a 13 MP front camera.

However, at this point, all of these are speculations and we won’t know anything for sure till HMD Global launches Nokia 8 at a special event in London on August 16, 2017.