Nokia 3310 has reincarnated. Yes, it’s true, the iconic Nokia 3310 that once ruled our hearts is back from the abyss and we couldn’t be happier about it. HMD Global, the company that holds exclusive rights to manufacture phones under the brand Nokia stunned everybody at the Mobile World Congress (MWC) 2017 event by announcing the return of Nokia 3310. And the anticipation surrounding the availability of the phone has been on the rise ever since.

As far as India is concerned, the smartphone is expected to come home in June along with its three siblings Nokia 3, Nokia 5 and Nokia 6. But other than that, the company has been tight-lipped about the launch date and the price.

If compared to the old Nokia 3310, a lot has changed in past 17 years since it was first launched in 2000. The phone was virtually unbreakable, a quality that we still remember Nokia phones to have. Apart from its rock solid built, the Nokia 3310 had a feature that hooked the users to its tiny screen for hours– Snakes. It is the earliest version of a smartphone game and boy, crossing levels after levels was so much fun!

As far as the technical specifications are concerned, Nokia 3310 (2017) runs on Series 30+ same operating system. While the new Nokia 3310 is better than old Nokia 3310, kudos to its upgraded battery. While the old one had 900 mAh battery, the new one comprises 1,200 mAh battery. The 16GB internal memory which is expandable up to 32GB make the new Nokia 3310 much useful, however the 2000 version certainly had set a high benchmark for the phones during its time.

Talking about the features, it was not only the phone and the user interface that got a makeover but also everyone’s beloved Snakes that got transformed. From black swan to rainbow coloured unicorns, Snakes got colour and 3D graphics 17 years after it rocked the market.

The new Nokia 3310 may not have all the glamorous features that other phones have to offer, but let’s be honest, it was never about the specifications but it is about the legacy. And for those of you who are looking for something extra, the new Nokia 3310 is available in funky new colours.

Now let’s find out what all has changed:

ALSO READ: Iconic Nokia 3310 makes a comeback in an all new avatar! Specifications, features and all you need to know

Design
Notice the weight loss? The new Nokia 3310 is sleek, light and colourful (warm red, dark blue, yellow and gray). It has a larger display with a curved screen for better readability under direct sunlight.

Display
While the tiny display screen worked well back then as the message space used to be short, however, the latest version is slightly large which definitely doesn’t match up to our current lifestyle.

ALSO READ: Reasons why the Nokia 3310 is an absolute savage; you’ll want to buy it right away

Camera
Okay, let’s be honest, back in the early 2000s, no one ever imagined that smartphones would one day replace digital cameras. But today technology has travelled a long way and we do need a camera to click photos on the go. So there you go, the new Nokia 3310 has answered your prayers and added a fancy (pun intended) camera to the old model.

Connectivity
In terms of connectivity, not much has changed, but the fact that the rejigged version of the phone offers Bluetooth brings some solace to our internet connectivity deprived hearts. 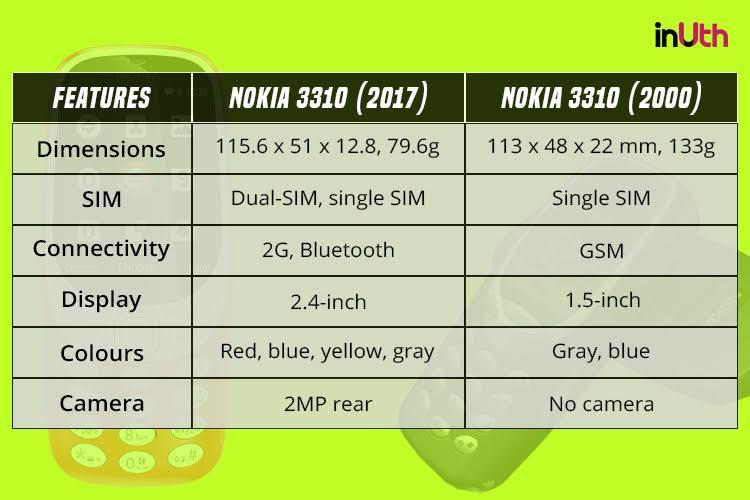