Remember when the internet couldn’t stop laughing at Nokia 3310 jokes (memes weren’t really a thing back then)? They’re probably about to make a comeback because Nokia will re-launch the 3310, perhaps the best-loved and most resilient phone in history.

The phone, originally released in 2000, was the first step towards the modern age of mobiles. The new incarnation of the old 3310 will be sold for a pretty cheap price and is likely to be pitched as a reliable second phone to people who fondly remember its battery life and nearly indestructible body. It will be revealed at Mobile World Congress later this month and we can’t wait to buy it.

It’s still possible to buy the 3310 on Amazon, though only through the marketplace and not directly from the company itself. Check out the link here.

On closer inspection, we found some hilarious reviews that reminded us of the old memes that were absolute gold. These reviews reminded us why we absolutely have to buy the Nokia 3310 and we’re pretty sure you’ll want to buy one too by the end of the article.

Around the world with my Nokia 3310

If only Abe knew..

Going back to the basics

You can always get new feet, we’re just glad the phone is okay!

This phone has been through more hardships than you ever will.

And then there were these hilarious questions:

There’s a solution to every problem.

Shoot all your musical.lys on your Nokia 3310 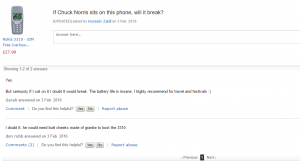 We really hoped we could order one. 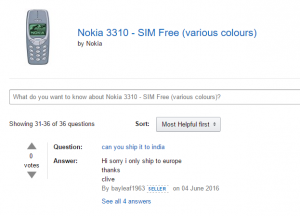 If you want to be the coolest kid on the block, you have to order one of these.