Many of you might have come across the image of a woman clad in a green saree who is being referred to as late AIADMK chief Jayalalithaa’s daughter. But is she her daughter? The answer is an NO! Like many instances in the past, this too is a fake image that is being shared on social media.

The lady referred to in the image has similar facial features as that of Jayalalithaa and is being dubbed as her ‘secret daughter’.

The image started doing the rounds in 2014 when the late Tamil Nadu CM was jailed in connection with the disproportionate assets case.

Popular singer Chinmayi Sripada vehemently tried to stop the rumour mongering by putting up a post on her Facebook page.

“The couple in the photograph are known to my family and they belong to an illustrious family of classical musicians. This rumour has been propagated long enough for even google image search to return with similar results. Like they say, repeat a lie long enough and it becomes ‘truth’,” she wrote adding that the reports are a ‘figment of the imagination of an unstable mind’. 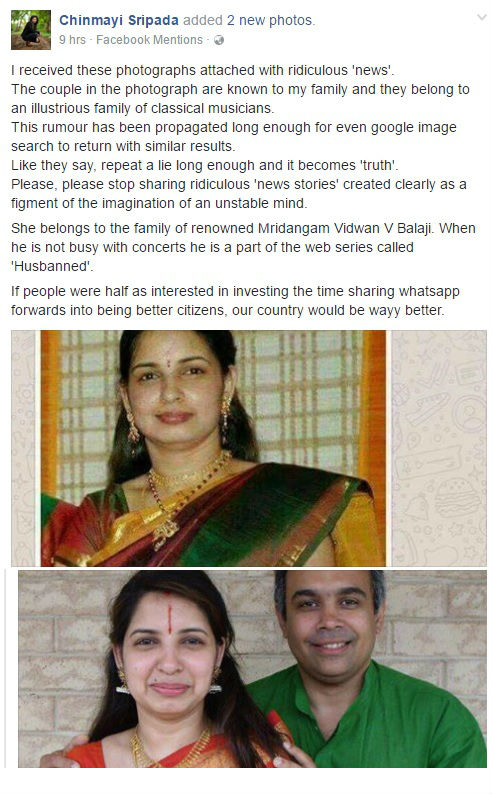 She also advised people to try and verify the WhatsApp forwards instead of following the trend.

Renowned musician Trivandrum V Balaji also posted a clarification for the picture which he said was his sister in law. “The person in this picture is my sister in law and we know her since her childhood and this has been annoying us for a while. Thanks to good friends like Chinmayi Sriprada and others who have done their best to clarify this in public,” he wrote on his Facebook page. 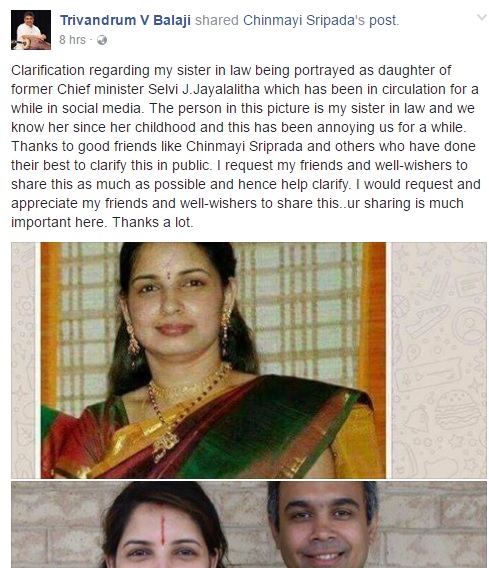 However, despite the clarification, many people kept advocating the ‘fake theory’ saying the faces in the pictures are different.

Chinmayi yet again came to her rescue. “To those who said ‘faces are different’. Please have a heart and understand that pictures taken 6-7 years apart will definitely look different,” she said.

The clarifications have been made, evidence been produced. But will the rumours stop? We hope they’ll end.

Also read: Tea stall owner does not use Paytm! And other viral stories on demonetisation which are FAKE!