Indian cricket team skipper Virat Kohli has been ruling social media for such a long time that even Instagram had to acknowledge his massive following. The photo-sharing mobile application announced its first-ever awards in India and no surprise that Virat was at the top of their list.

With over 19.8 million followers, Virat bagged the Instagram award for “most engaged account” as of March 2018. His post generated the biggest number of engagements, likes and comments through the posts which he shared over the last one year.

In December last year, Virat tied the knot with his long-time girlfriend and Bollywood actress Anushka Sharma which created a strong hype on different platforms. The moment the Indian skipper shared snapshots from his wedding, they flooded over social media. As per several reports, one of the posts he shared was liked over 45 lakh times which helped him win the award.

Today we have promised each other to be bound in love for ever. We are truly blessed to share the news with you.This beautiful day will be made more special with the love and support of our family of fans & well wishers. Thank you for being such an important part of our journey.

ALSO READ: Nagin Dance: Originated From Bollywood, Here’s How It Got Mixed With Cricket

Though he has fewer followers on Instagram than several other celebrities, he rules the roost in terms of likes and comments on his posts.

Apart from Virat Kohli, it was Padmaavat star Deepika Padukone who won the ‘most followed account’ prize with 22.4 million followers. She is ahead Bollywood starlet Priyanka Chopra (22 million followers). 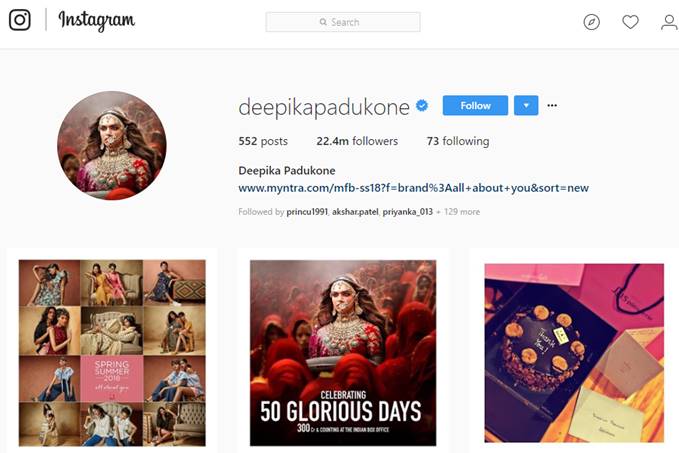 ALSO READ: Sports Not Important? Boxer Gaurav Bhiduri Got No Reward Despite Talking to Delhi CM

Actresses Alia Bhatt and Shraddha Kapoor were presented with a milestone plaque in recognition for building a community of 20 million followers. Shahid Kapoor’s younger brother Ishaan Khattar got the award for India’s “emerging account” for his fan base which grew significantly throughout 2017.