At least two civilians were killed and eight injured after Pakistan Rangers resorted to heavy shelling along the international border in Jammu and Samba districts early on Friday.

A senior BSF official said that the troops are effectively retaliating.

“Pakistan Rangers resorted to heavy firing and shelling along the IB in several areas in R S Pura, Arnia and Ramgarh sectors since 0640 hours”, a BSF officer said.

Also Read: How the murder and rape of a seven-year-old brought Pakistan to its knees

They targeted around 40 Border Out Posts (BoPs) in three sectors using 82 mm and 52 mortar bombs, automatic and small weapons, he said. 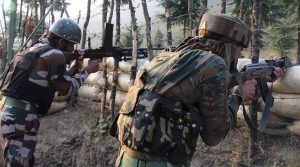 In a separate instance later in the day, five civilians were injured when the nighbouring country violated the ceasefire in Hiranagar sector of Kathua, reported ANI.

A police officer said Pakistani troops have targeted over 40 civilian villages in Arnia, R.S. Pura and Ramgarh sectors along the IB till now.

On Thursday, a 17-years old girl and a BSF jawan were killed and six persons injured when Pakistan Rangers violated the ceasefire and targetted villages along IB in three sectors of Jammu and Samba districts.

Expressing concern over the targetting of civilians, Former Jammu & Kashmir chief minister Omar Abdullah said that both India and Pakistan will together have to tackle the constant violations of the ceasefire.

J&K’s deputy chief minister Nirmal Singh stressed that India was not going to be “befooled” by Pakistan’s cowardice.

“Pakistan which is basically a terrorist state and only believes in violence is not learning the lesson from its misdeeds. It’s very clear that India is not going to be befooled by all these cowardice act of Pakistan,” ANI quoted him as saying.