Splitsvilla X aims to help girls and boys establish ‘special’ connections and find someone worthy of love. The show is hosted by Sunny Leone and Rannvijay Singh and has managed to stay in news owing to atrocious tasks that its contestants are made to perform. If you have been following Splitsvilla you would understand and agree that the said tasks are outrightly weird. From making them ‘lick and pick’ each other to saying phrases like ‘Aa chipak’, the contestants are asked to do borderline vulgar tasks. Apart from giving its contestants gross tasks to perform, this season of the show feeds an idea in the minds of girls that they need validation from boys at every step in their lives.

Before you start wondering how the show has stooped so low, allow me to explain. As mentioned earlier, Splitsvilla X is about men and women finding connections. To stay true to this entire concept, all the contestants are made to perform tasks in pairs for which it becomes really important for boys and girls to maintain a rapport with each other to come out victorious. This is where the connections play an important role in the villa. Most of the times, girls are asked to choose boys they would like to perform the task with. Quite obviously, girls pick those boys with whom they feel they have a connection. Though the girls think that they have picked the boys on their own, however, that is not the case. 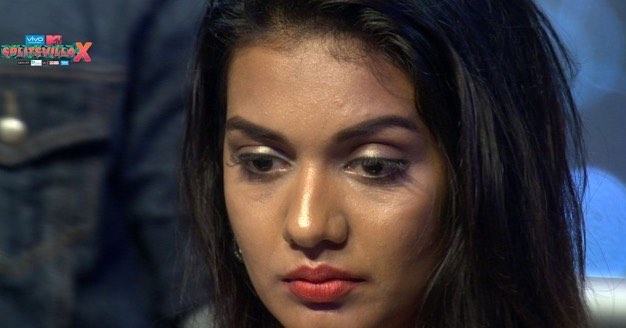 In one of the episodes, Divya was really sad

Also read: Splitsvilla X’s Priyank Sharma on ‘licking’ task: All boys enjoyed it, we don’t get to do it in real

As someone who has seen almost all episodes of Splitsvilla X, I would like to say that in this show, girls are used as mere pawns. It is really sad to see that girls are reduced to just being cry babies and are at the mercy of boys, who do all the planning and plotting behind the girls’ back before the start of the task and manipulate them for their benefits.

Take this for example – Priyank, one of the most popular faces of the show, seems to be torn between two girls – Divya and Nibedita. What he feels for Divya seems real to everyone and they behave as a couple who are in love. But Priyank also feels something for Nibedita, and the latter tries a lot to establish a connection with him. Priyank wants to go to the Oracle (a dome which decides through a set programming if a pair is ideal or not) with Nibedita to find out if they are made for each other or not. Every time he performs a task with Nibedita, Divya is heartbroken and can be seen crying. In fact, Divya’s pain irked even Sunny Leone as she got angry at Priyank for treating Divya as a second option.

This is not the only example. Another contestant Baseer also treats Steffi as a second option. During one of the tasks, Baseer performed with Steffi but when the time came to go to the Oracle with her, he took a step back. The reason he gave was that Naina, who is his girlfriend, would not like him getting close to Steffi. Post this, Steffi was seen crying and claiming she that had been wronged.

These are just two of the many examples in the show. Girls in this season rarely take charge for themselves. They just get swayed by what boys say and do what they are asked to do. Be it deciding on whom to vote or whom to choose during a task, it’s the boys who call the shots. All girls do is cry out in frustration, feeling deceived.

In the previous season of shows like Spiltsvilla and Roadies, we were used to seeing girls take charge and mould situations to their benefit. But it is really disappointing to see girls playing second fiddle to boys this time around. Considering the fan following Splitsvilla has, it won’t be wrong to say that girls in this season are not setting a right example. They are seen as victims of the scenarios, and the worst part is, they are not doing anything to change it.

This brings me to this one question: do we really need such shows where females are shown as the weaker sex? Food for thought, eh!