Two soldiers who were involved in Indian Army’s ‘surgical strikes’ on terrorist camps in Pakistan-occupied Kashmir (PoK) last September were felicitated with gallantry awards at a high-profile ceremony at the Rashtrapati Bhawan on Monday. Major Rohit Suri of the Para Special Forces, the Indian Army’s parachute regiment, was conferred with Kirti Chakra, the second-highest peacetime gallantry award in India, by President Pranab Mukherjee. Naib Subedar Vijay Kumar was awarded the prestigious Shaurya Chakra at the ceremony, which was also attended by Prime Minister Narendra Modi.

English daily the Indian Express noted that the handouts briefing about the acts of the two Indian Army soldiers were devoid of fine details of the September combat mission, which was carried out after Islamist terrorists with alleged links to Pakistan’s security agencies attacked an Indian Army base in Jammu and Kashmir on Sept 18. The Indian Army said it killed 35 to 50 militants in retaliatory strikes across the border on Sept 29, a claim that Pakistan denies.

However, there have been several reports in the Indian media since last year that have corroborated that the strikes did, indeed, happen. An Indian Express report in October last year quoted several eyewitnesses in PoK saying that they had seen bodies of Islamist militants being hauled on trucks the morning after the surgical strikes. A former national security board member at the Indian government had also reckoned in an interview to InUth that satellite technology was possibly used by New Delhi to gauge the enemy locations before the military executed the plan.

Major Rohit Suri was leading the group that carried out surgical strikes. The handout lauds Major Suri for displaying “nerves of steel” and “high degree of combat leadership” when militants started shooting at the Indian soldiers after they had crossed over into the Pakistani side.

Suri is credited with masterfully strategising the entire operation and for his presence of mind for first “neutralising” the terrorists out in the open before heading over to take on bunkered militants.

He has been conferred with a Kirti Chakra.

This is what the handout says about Major Suri’s courageous actions during the cross-border operation,

Know your heroes. Major Rohit Suri, Kirti Chakra. This is what he did in the surgical strikes into PoK. Received his medal today. pic.twitter.com/SfrK0iWqCc 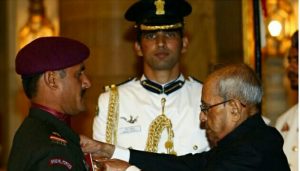 Naib Subedar Vijay Kumar was instrumental in surveying of the enemy territory and gather information about the enemy targets. He was also part of the assault team that took out the militants on the Pakistani side. The handout says that he was handling a grenade launcher during the mission which he very artfully employed to destroy a terrorist bunker and kill two militants.

He has been awarded with a Shurya Chakra.

A group photograph of awardees of gallantry awards with the Prime Minister and President among others.