An Indian-origin man, Avijit Das Patnaik, recently lost his job at DBS Bank in Singapore after he posted a picture of a torn Singapore flag on Facebook.

Ahead of India’s Independence Day, Patnaik had posted an image on the Facebook group ‘Singapore Indians & Expats’ which showed a T-shirt bearing a print of a torn Singapore flag with the national flag of India underneath. He had captioned the image “Phir bhi dil hai…”

The image drew severe backlash from Singaporeans who criticised the image for being offensive and disrespectful. While the post was later taken down and the bank defended Patnaik by saying that he only “wanted to show that even as he is in Singapore, he remains Indian at heart,” the outrage could not be doused and a complaint was registered with the Singapore Police.

ALSO READ: This Kolkata Man Has Been Cleaning Up Your Unpatriotic I-Day Mess For 8 Years 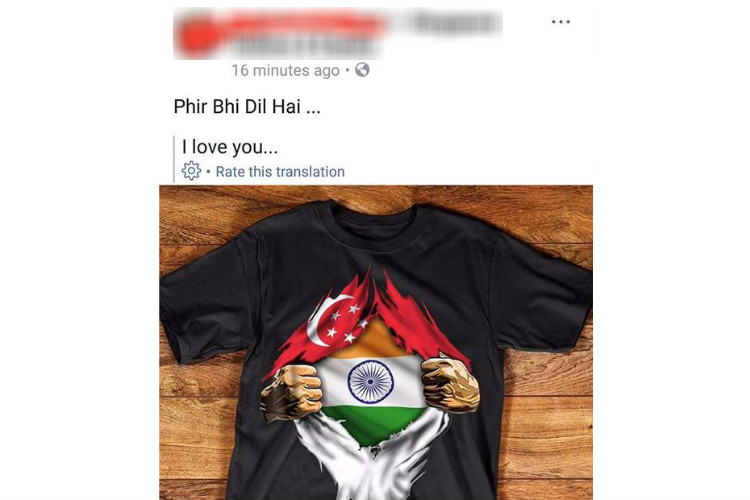 The image shared by Patnaik

On Tuesday, the bank released another statement, wherein they stated, “DBS strongly disapproves of such actions by our employees.” The statement added, “At the same time, it is fair and right that all employees are given the benefit of due process. Since the incident, a disciplinary committee has been convened and as of 24 August, he (Patnaik) is no longer with the bank.”

However, when the bank was questioned whether Patnaik was sacked or he resigned, a DBS spokesperson refused to comment, a Channel News Asia report stated. “We have nothing further to share beyond the post,” they were quoted as saying.

According to the Singapore Arms and Flag National Anthem Act, any person that treats the flag with disrespect may be fined a maximum of 1,000 Singapore dollar.