If you ever wanted to get your hands on Snapchat Inc’s funky looking smart glasses– Spectacles, now will be the right to do so. Snapchat’s video and photo recording smart glasses are up for grabs on e-retail website Amazon and they are available for just Rs 15,300 (no, we’re not kidding!).

To recall, Snapchat Inc had first unveiled Snapchat Spectacles in September last year. At the time of its launch, it was difficult to get your hand on these cool and colourful sun glasses as they were available only at the yellow-coloured vending machines called the Snapbots. Even so, it was difficult to a pair of Spectacles as the Snapbots disappeared after being in a location for a day. However, the company eased up its norms in February this year and started selling Spectacles through its online store.

Finally, Spectacles have made its way to Amazon. The good news is that you can get your hands on these funky looking goggles in India as well. Don’t believe us? Take a look at this: 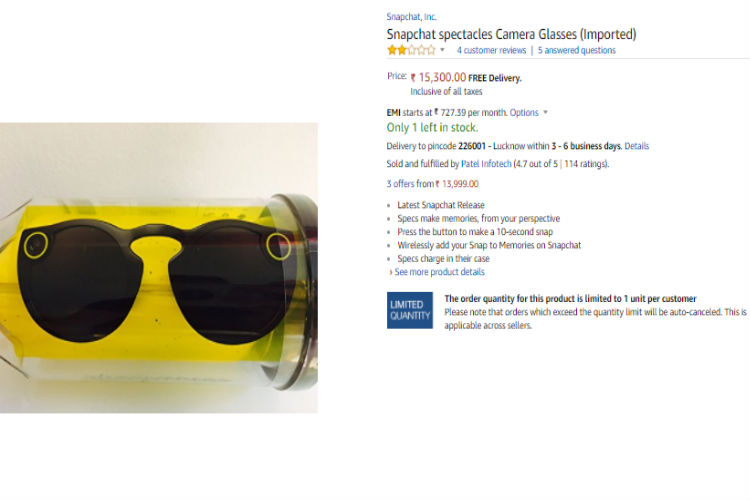 Interested buyers can also purchase the black-coloured Snapchat Spectacles in a monthly EMI of Rs 730 and according to the e-retailer, the ‘camera-glasses’ will be delivered to you within 3 to 6 days. However, there’s a catch, one customer can order only one pair of spectacles. So, in case you were planning to grab one for your best friend as well, you will have to use a fresh user ID.

Spectacles are available in limited in India. So, order your Spectacles now! Meanwhile, take a look at some of the amazing videos shot using Spectacles:

I finally got a pair of Snapchat’s @Spectacles so add me on snap to see me do stupid stuff hands free. Andysjhc pic.twitter.com/uLmKX8PzHQ

Having too much fun with @Spectacles pic.twitter.com/ecb2svTiUj

My latest @Spectacles adventure is on the Suspension Bridge in Vancouver. pic.twitter.com/upzln7FRJT