Facebook is testing a new feature on its mobile site that encourages new users to enter their names as per their Aadhaar card while signing up for a new account. The move, according to the social media giant, is aimed to curb the rising number of fake accounts.

While creating a new Facebook account via the mobile site, the social media platform is asking the users “What’s your name?” Which is then followed by a message from Facebook that states — “Using the name on your Aadhaar card makes it easier for friends to recognize you.” 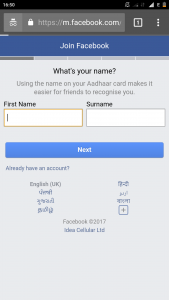 Notedly, Facebook is not asking for Aadhaar card number or other details, but just the name as per the Aadhaar card.

Also Read: Now you can ‘snooze’ your annoying friends on Facebook, but there’s a catch

“We want to make sure people can use the names they’re known by on Facebook, and can easily connect with friends and family. This is a small test where we provide additional language when people sign up for an account to say that using the name on their Aadhaar card makes it easier for friends to recognise them. This is an optional prompt which we are testing. People are not required to enter the name on their Aadhaar card,” NDTV quoted a Facebook spokesperson as saying.

As the spokesperson mentions, this is a small test, not everyone can see this prompt when creating a new account and Facebook, of course, wants you to use your real name, and this is just one way to encourage its users.

With over 241 million accounts, India is currently one of the fastest growing markets for Facebook – in addition to being the second-largest market after the US.

The association with Aadhaar is bound to raise suspicion as lately Modi government has been pressing for connection of Aadhaar with not only public bodies but also for private entities like banks, telecom operators, insurance providers also.

Many Twitter users questioned the logic behind introducing this new feature on the social media platform.

How are they concerned ? Are they looking for Personal Data ?

Sir, Is it not the threat ?#DataSecrecy I personally belive this is intrude to one’s privacy! @NandanNilekani #justAsking

A socialising platform should have no role in deciding what name I chose to use while creating a profile as long as it’s not hurting anyone’s feelings. This is another #facebookcrap

Its a TRAP by CIA and other US companies to cross verify their data for commercial, political and other reasons! Conversion! can be planned systematically!

Finally Aadhaar card to be linked with Facebook. There won’t be any Angel Priya.