Apple’s anniversary edition iPhone X went on sale in India on November 3, 2017. Priced at a whopping Rs 1,02,000, the device became the first smartphone in India to cross the Rs 1 lakh mark. iPhone X has created a buzz in the market wherein Apple loyalists and users of other branded smartphones alike are flocking to brick-and-mortar shops and online retail store to get their hands on this fancy device.

Nearly 33o retailers have listed iPhone X for sale on OLX India, which is one of the most popular online classified marketplace in the country. Early buyers, who are using the limited supply of iPhone X as a golden opportunity, are selling the 256 GB variant of the device at a price as high as Rs 1,35,000. This is nearly Rs 33,000 more than the price listed by Apple, which is selling the device at Rs 1,02,000 in India.

ALSO READ: Man rides a horse to collect his iPhone X; 5 bizarre things people have done to get Apple devices 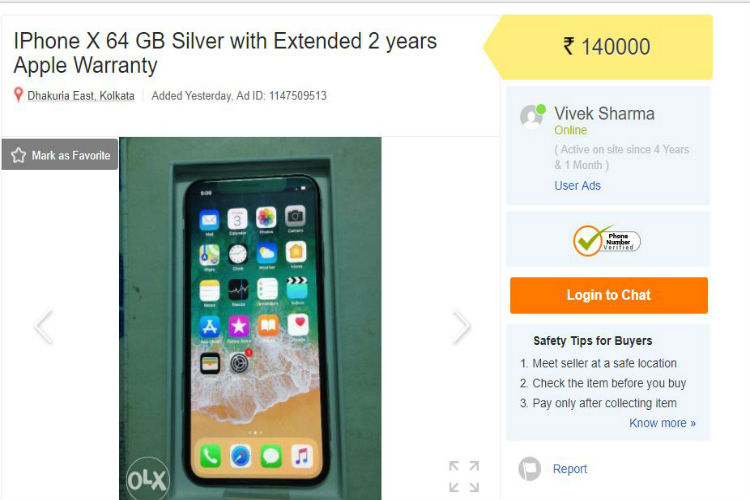 Interestingly there’s a wide gap in the price listed by various sellers across the country. While a seller from Chennai has listed the 256 GB variant of iPhone X at Rs 1,35,000, a seller based in Mumbai has listed the device for Rs 1,15,000.

ALSO READ: iPhone X price, specifications, features, and everything else

Meanwhile, the high demand of Apple iPhone X in the market has prompted some black-market vendors to buy the device in bulk in the southeast Asian market, where the phone is available at a lower price than that in India. Reports suggest that the Mumbai Airport’s customs department has seized 11 units of Apple iPhone X from Chhatrapati Shivaji International Airport.