Are you planning to get a new smartphone and you are bored of the same old Android phones? Well, this might be the perfect time to buy a new iPhone as Amazon India is offering Space Grey variant of iPhone 6 with 32GB internal memory just for Rs 28,999 (no, we are not bluffing!).

The e-retailer is offering a price cut of Rs 1,701. The customers can also opt to buy the smartphone via EMI which starts at Rs 2,590 per month.

The phone is being sold by a third party e-retailer with a warranty of 1 year. Customers can even avail a discount of Rs 8,550 by opting for the exchange option. However, there’s a catch. The offer is valid only up to March 7, 2017, only. 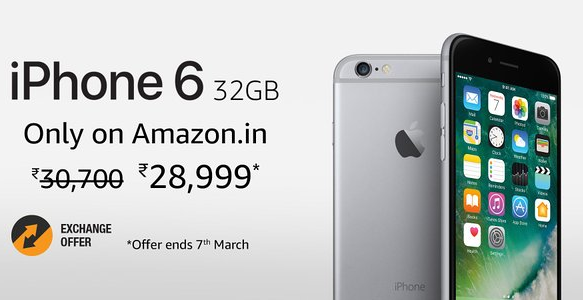 Apple launched iPhone 6 in September 2014. The smartphone is powered by Apple’s A8 processor and iOS 9. The 4.7-inch Retina HD display of the phone is protected by IPS technology making it resistant to water and dust. iPhone 6 comes with 1GB RAM and features an 8MP rear camera and 1.2 MP front camera.

The phone has 4G LTE, Bluetooth, Wi-Fi and NFC for connectivity and has a built in 1810 mAh lithium ion battery. iPhone 6 comes with a fingerprint sensor that is built into the home button and 3.5mm headphone jack. It also features FaceTime video calling, Apple Pay and Apple’s digital assistant Siri.

ALSO READ: Apple iPhones to be Made in India now!

So hurry up guys and get your brand new iPhone now!