Chris Mendiola wouldn’t have thought he would get fame this way. He must have thought he was showing solidarity with his dog, Bear, but did he actually know what he was getting tattooed on his arm? Poor Chris mentioned in his Facebook post, writing about Bear: “For those of you who know Bear know that he has a tattoo given to him from previous owners. It sickens me to know that people tattoo their pets. So tonight I got his tattoo.”

He actually went to a tattoo artist and got a neuter tattoo made on his hand. No, we’re not joking.

The guy defended his action and said that he knew what he was doing. “I knew I was going to get a lot of backlash from it. I did. I got some from my coworkers. I got some from people I thought were my close friends,” Chris told Gizmodo, an online web portal. 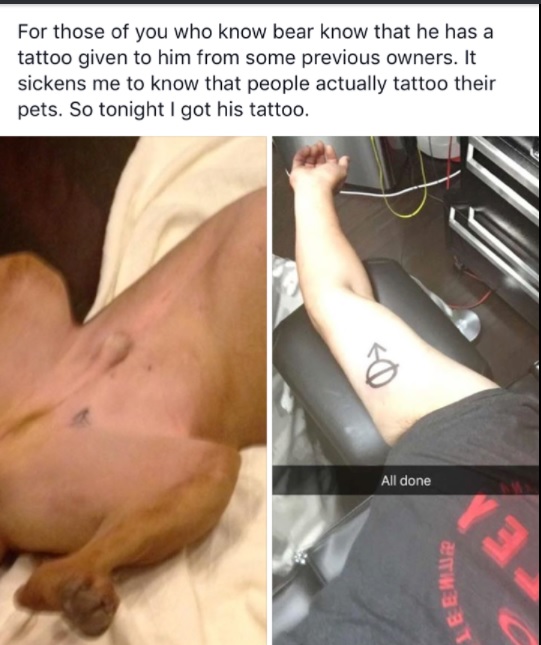 The reactions Chris’ decision got on Reddit were pretty LOL-worthy:

Thank you, Reddit, for the best bad tattoo story of all time pic.twitter.com/slrYAWc8OQ

Was he ever going to realise?! “So you want this thing that looks like a male symbol with a big line through it?”
“Yup.”

Am I missing something? Why do you need to tattoo a male dog to say it’s neutered? His balls are literally missing.

Oh God, the longer I look at it, the FUNNIER IT GETS

(Also read: Internet shares real life tales of dogs acting as a ‘guardian’ and it will make you happy cry)