Venus is a weird planet and it just got creepier. The planet, which is popularly known as the Earth’s ‘evil twin’, was recently captured smiling by Japan Aerospace Exploration Agency’s spacecraft– Akatsuki, which has been orbiting the planet since December 2015.

The bow-like structure that extended over a distance of 10,000 Km across the atmosphere of Venus has baffled the scientists. Apparently, clouds in the high region called Aphrodite Terra, where the mega structure appeared, move at a speed of about 100 metres per second, which is greater that the speed at which the planet rotates on its axis. This phenomenon is called ‘super-rotation‘. This has baffled the scientists as the bow remained relatively stationary over the Venusian skies for days before it disappeared despite the speed of the clouds.

Lead scientist on the study, Makoto Taguchi believes that this happened due ‘gravity waves‘, a phenomenon that is relatively common on the earth as well. But don’t confuse them with the ‘gravitational waves’. While ‘gravitational waves‘ are the ripples in the space-time fabric that move as a wave with the speed of light, ‘gravity waves’ are created over an uneven surface like the ocean or a mountain when push and pull are created between the air particles wanting to go up and the gravity dragging them down. 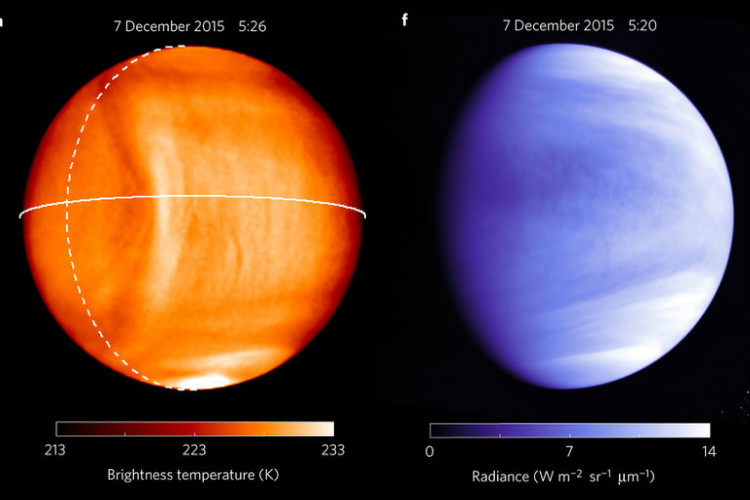 The scientists ran numerous simulations to confirm their results. However, they are stumped by the existence of the structure despite the occurrence of super-rotation on the planet. Meanwhile, scientists believe that more study needs to be conducted to completely understand the planet that continues to mystify the astronomers.