We seem to be a step closer to digging up dirt on Mars and its watery history! The Curiosity rover has struck gold and found what scientists suggest is a slab of ‘cracked mud’ on Mars.
Latest images from Nasa reveal first evidence of what scientists say is cracked, dry mud on the Martian land.

The Mariner 9 mission, which arrived in 1971, revealed clues of water erosion in river beds and canyons on Mars as well as weather fronts and fogs. This was our first tryst with finding water on Mars.

Latest images released suggest a network of cracks in the Martian rock slab called ‘Old Soaker’, which could have been formed around 3 billion years ago. Scientists have used Curiosity rover to examine ‘Old Soaker’ in the recent few weeks. The slab is about four feet long and has stand-stone interspersed with mud-stone layers, suggesting vigorous water flow in the area.

Curiosity science team member Nathan Stein, who led the investigation of the site ‘Old Soaker’, has stated that mud cracks are the most likely scenario here.
If this is true, these images will be the first time mud cracks are sighted on Mars by the Curiosity rover.
Stein added that even from a distance, they could see a pattern of four- and five-sided polygons that don’t look like fractures they’ve seen previously with Curiosity.
He stated that the cracks look like what you’d see beside the road where muddy ground has dried and cracked.

These would confirm the existence of an ancient era on Mars where these sediments were deposited and dried up post some wet conditions.

Check out the stunning images here: 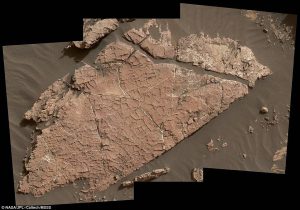 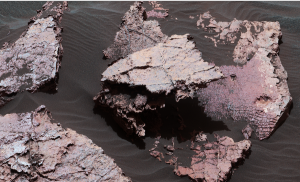 Out of the world, aren’t they?