Indian advertising industry has creative and clever individuals and with increasing competition, advertisements are getting even better and no wonder, worse. The amount of imagination needed to catch the eyeballs of the potential customers is huge but sometimes, it backfires. Some advertisements on Indian television are just unacceptable for their sheer amount of stupidity and meaninglessness. But don’t we need them? Yes, we do, because what is life without some humour.

On one hand, where millennials still remember ads like Cadbury’s where a woman dances in the cricket field after her husband/partner hits a six,  Dhara’s where a small kid who leaves his house in anger, gets lured back to have jalebis cooked by his mother, Humara Bajaj (Naye bharat ki nayi tasveer) and many more beautiful ones, we have also been scarred by some of the most repulsive ads.

We are still clueless as to what were these ad-makers thinking while making ads that have paid no respect to common sense whatsoever. From the unnecessary glamorous Paan Masala Ads to Katrina Kaif seducing youngsters (and kids?) to have a cold drink, the list is long and can be longer than what we have here.

So, here are 7 advertisements which have stayed in the minds and hearts of all for all wrong reasons.

Why do you need to seduce people to have a drink which serves no such purpose. Slice and Frooti have been drinks which have been quite popular more with little kids than adults, because of its sweet taste. So what exactly is Katrina doing with that mango? Please let us know if you figure that out.

Every MDH Masala advertisement ever. We totally respect him for creating such a brand name but please can he just stop appearing in those ads? 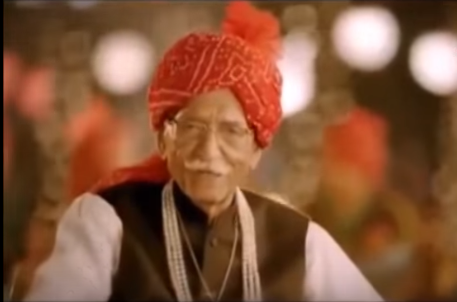 How often have you asked a friend “Aur kya chal raha hai?’ What would you do if your friend responds with ‘Fogg chal raha hai’. Seriously? This is the most lame tag line ever.

Also Axe Deo ads. Have you ever seen women getting attracted to men the way these ads show? Grow up guys.

One of the most annoying ads on Indian television are Patanjali ads, not only for the way they’re packaged but also for their hypocrisy. And doooode, why do you need to sing and dance to ‘do ghoont ki baat hai’ for selling an amla and aloevera juice? *scratches head*

At least these people could have hired a better ad professional for creating their ad but no, that obviously did not happen and the result was ‘Jo bhi situuuation, jo bhi situuuation, bas bajna chahiye gaana’. Wow.

How can anyone miss this one? “Kya aapke toothpaste mein namak hai” had to be on the list. Who doesn’t remember Priyanka Chopra  with a mic, asking random strangers with toothache whether their toothpaste has that magical ingredient.