Unlike most stand-up comedians who make their listeners go ROFL, Kunal Kamra seems to have a polarising effect on his audience. While he has found his fans in Delhi Chief Minister Arvind Kejriwal and writer Manu Joseph, he has also been at the receiving end from trolls on social media.

Known for his podcast ‘Shut Up Ya, Kunal‘, Kunal Kamra recently deleted his Twitter handle after users started re-tweeting his posts from earlier times. These posts contained stereotypical jokes about Muslims, Sikhs and Mother Teresa as well as some that contained abusive language. According to OpIndia, after his old posts began being retweeted, Kamra deleted his posts but later deleted the account itself after receiving texts and calls on his number which was made public.

Here are some of Kamra’s old tweets that Twitterati flagged:

Mentor of @mehartweets is insulting Sikh religion. But she doesn’t have guts and spine to speak against Kunal Kamra. pic.twitter.com/v3RbFFvT5l

Seems Kunal Kamra deleted this tweet. What do you gift at the comedy shows of Liberal Secular Pretending Standup comedians? 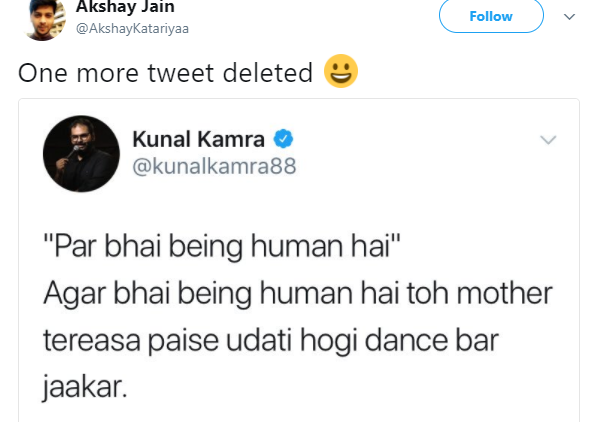 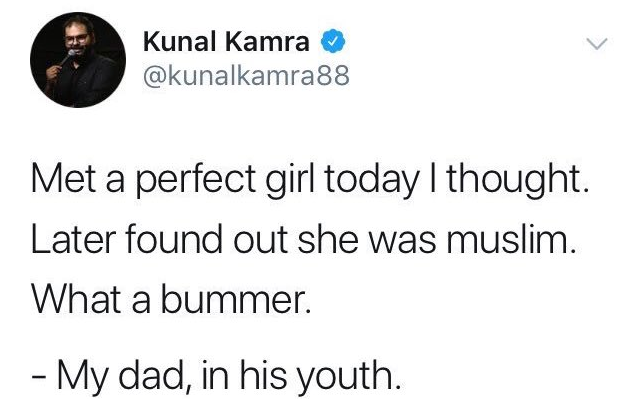 Here’s how Twitterati reacted after Kunal deleted his account:

People Retweeted his own tweets & Kunal Kamra deactivated his account, It’s pretty hard for liberals to even look into the mirror these days.

Kunal Kamra deactivating from twitter is no less amazing than the success of angrezo desh chhodo.

I have now seen everything I need to see in life. Bye. pic.twitter.com/kMpfT40iBh

In March last year, Kamra uploaded a stand-up gig ‘Patriotism & the Government’ on YouTube, which did not go down well with many users. The video went viral and it resulted in him receiving death threats. He also faced backlash after he responded to cricketer Gautam Gambhir’s stand on the national anthem.