A video of Anushka Sharma scolding a man for throwing plastic garbage on the road went viral as soon as it was posted by her husband Virat Kohli. The man who threw the garbage has now responded.

The man, Arhhan Singh, in a Facebook post agreed that it was his careless mistake. But at the same time, he lashed out at the couple. “A little etiquette and politeness in ur dialogue wouldn’t have made u a lesser star !!” Singh wrote in his FB post.

He started his post with a Disclaimer: ‘I have no desire to gain any mileage from this post of mine…’ 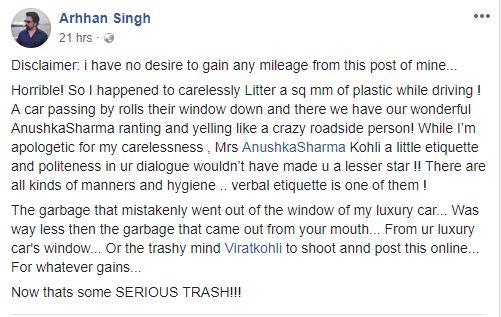 Not only Singh but his mother also took to Instagram and expressed her anger. Singh’s mother Gittanjali called it a stunt in the name of cleanliness.

She wrote, “You both posted a video for your fans n followers by violating basic rights to privacy and you shamed my son in the video as well in your post content.” She further wrote, “As a mother, I would like to state that you have not only shamed my son on social media by not blurring his face, but you’ve also exposed him to unwanted hostility and danger from fanatics for such a small thing that you claim he has done but have no proof of anyways. I am concerned about my son’s safety!”

@anushkasharma @virat.kohli The last thing we would want is to get publicity out of your cheap STUNT in the name of CLEANLINESS! You both posted a video for your fans n followers by VIOLATING Basic Rights to privacy &you shamed my son in the video as well in your post content you both may be who you are in your fields, with millions of followers & all the PR backing you… you may be payed for your campaigning or maybe doing it for sheer publicity As a mother,I would like to state that you have not only shamed my son @arhhansingh on social media by not blurring his face, but youve also exposed him to unwanted hostility…. and danger from fanatics for such a small thing that you claim he has done but have no proof of anyways ? I am concerned about my sons SAFTEY !!! how dare you crush somebody’s image/and morale and reputation and expose him to public hate, a boy who is on the verge of starting his ventures, ..just to prove what good citizens you both are to increase your fan following ?How dare you?? If you both really cared or bothered about cleanliness , then you would actively do something about all the garbage in your own lane.. you would make a noise and use your VOICE to urge the municipal authorities to take action atleast in the lane where you live,to start with, which you haven’t . Posting videos of fake bravado just to fool your followers. If your intention was genuine then you would pull over and politely correct the person for littering IF THEY DID in a decent and real manner… and not by displaying such a rude and arrogant attitude, and then posting it for the world to see! You have caused a lot of grief with your post & this is morally and humanitarianly very wrong. You may be #AnushkaSharma or #viraatkohli in your house or on screen & the field…but on the streets you are just a citizen trying to correct another… DO IT WITH KINDNESS ….fear karma . And just FYI , he did not react badly, not coz of who you both are.. we couldnt care less,but only because he has a decent upbringing ! Unlike people like you, who seem to think that you are the empowered ones to talk and treat people as you wish !

Soon after the video went viral, though some praised the celebrity couple, several social media users expressed their disappointment over the whole episode as well.

With due respect. You are a public figure. Did u stop cussing during matches? Did u even asked camera to not show in slo-mo, whenever u cuss in every match. I see lot of young people follow u and find cussing fashionable. Where are ur morals now? Charity begins at home perhaps?

Cheap and crass level language by Anushka Sharma. And who recorded this video? Cheap publicity stunt.

Anushka Sharma scolded someone for throwing garbage and the recording is doing the rounds.
I wish the face of the person would not have been shared as even though he made a mistake, he need not be made infamous through the clip.

Why are you recording your wife’s heroics and publishing it in social media??.. is this the first time you saw someone threw a plastic cover from a car?? If your intention was to advice him, first be friendly instead of being bossy.. this kinda attention seeking is so cheap

Shouldn’t have recorded it or posted it on social media. Looks like publicity stunt though they don’t need it. However clean the intentions might be, the whole act gives negative message if questionable means are adopted.