When Maine Pyar Kiya first came out in 1989, it was a romantic classic and remains so even today. The saga of two friends Prem (Salman Khan) and Suman (Bhagyashree) falling in love over time and eventually getting married created Box Office magic. The on-screen chemistry between Salman and Bhagyashree was lauded by many, however, while Salman went on to become a huge star, his co-star was largely missing from mainstream cinema.

A recent Facebook post by Humans of Bombay revealed the actress’ love story and it is just as heartwarming as Maine Pyaar Kiya, probably more because it’s a real-life tale. Bhagyashree revealed that her husband Himalaya Dasani, was the “naughtiest kid in class” while she was that perfect kid who always made the class monitor. “We would fight all the time and the rest of the class would have a blast! We were like Yin and Yang,” she said. “The more we fought, the more it became clear that we couldn’t be apart.” 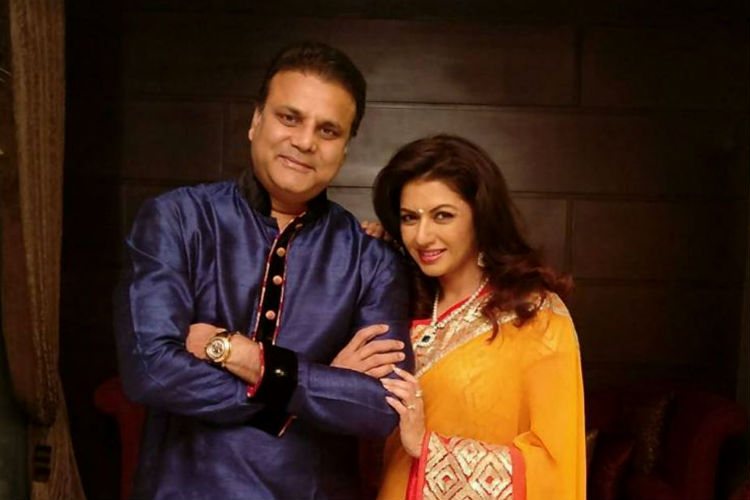 Neither of the two ever said anything to each other until the last day of school when Himalaya blurted, “I have to tell you something.” But, even so, he couldn’t bring himself to expressing his feelings. “Finally, I went upto him and said, ‘look, just say it…I’m sure the answer will be positive’ and that’s when he told me he liked me,” she said.

Read on for #relationshipgoals https://bhagyashreeonline.com/blog/2017/07/14/why-is-respect-more-important-than-love-in-a-relationship/

However, the two drifted apart after school as they couldn’t meet each other as often. They decided to break up but Bhagyashree believed that she always thought that if they truly loved each other, they would be together in the future. While she went on to work in Maine Pyaar Kiya, Himalaya moved to the United States to study. The distance only brought them closer as they realised they cannot be without one another. So, when he returned, they decided to get married against her family’s wishes.

“We went to school together — he was the naughtiest kid in class and I was always the class monitor. We would fight all the time and the rest of the class would have a blast! We were like Yin and Yang — the more we fought, the more it became clear that we couldn’t be apart. We never dated though…he never even told me how he felt until the last day of school. He said, ‘I have to tell you something’ and then for one week he kept trying to say it but would always back out. Finally, I went upto him and said, ‘look, just say it…I’m sure the answer will be positive’ and that’s when he told me he liked me. I come from a very conservative family, so even after that while we were in college, we would barely meet or talk on the phone. When I told my parents about him, they thought we were too young to decide something like this, and I believed as well that if he really loved me, we should be apart for sometime — he should explore, know that I’m the one and then we could be together. So we did break up when he went away to the US to study, and that’s when I signed Maine Pyaar Kiya.
Before signing the film, while he was still in the States I went and met his parents to ask them if they were okay with me getting into films…we weren’t even together at that point, but I guess somewhere I knew that we would in the future. They said that they had no problems…and I began shooting. When he came back home during the course of the shooting we both knew that we wanted to be together, but my parents still wouldn’t allow us to meet or speak on the phone…so I decided to speak to them. I told tell them that seeing him made me happy, that I couldn’t be without him, but they were still adamantly against our relationship. I knew then that there wasn’t any other way.
I called him up after this conversation and asked him, ‘are you sure of yourself, of us? This is the deciding day…either I’d be in his life forever or not at all.’ I said, ‘I’m leaving my house now, if you love me come and pick me up’ and within 15 minutes he was under my house. We had a small ceremony at a temple — his parents, Salman, Sooraj ji, a few of our friends attended and that’s how we go married.
There after, Maine Pyaar Kiya went on to become such a big hit, but I was a woman so in love with my husband and my son Abhimanyu who was born soon after that I said no to every offer I got. I have absolutely no regrets though, I look at my life, my family now and I feel so proud. Yash Ji always said, ‘you’re a foolish girl’ and oh yes, I loved being foolish! Very often, people say ‘giving up such a bright career’ is backward, but I disagree. I respect and admire career women who can juggle both, but I took the decision of being a full invested home maker…and believe me, that’s a thankless job. But it’s all worth it when you see your children growing up into fine human beings.
Just like I played a role in a movie, the role of a mother was a part of my life…but is not defined by it. Today, I’m into fitness, nutrition, traveling and if another movie comes along— I’ll do it all over again. I don’t like that either you’re a ‘working woman’ or a ‘stay at home mom’ — why can’t women be 10 different things…why can’t we keep exploring and with every phase, discover a new passion? From actress, to mom, to giving exams on nutrition at this age, I’ve loved every feather on my hat…and there will be plenty more to add to it!”

After their wedding, the couple was soon blessed with a son and Bhagyashree made a choice to focus on her family rather than her career. She said, “I have absolutely no regrets though, I look at my life, my family now and I feel so proud. Yash Ji always said, ‘you’re a foolish girl’ and oh yes, I loved being foolish!” She became a “full invested home maker” and declares she has no regrets for the path she took.