Advertising is an art that requires creative brilliance and a sense of aesthetics. And when it is about women empowerment, it is not a rocket science to understand that making a sexist comment along is just not right.

However, the marketing team of Times Group just skipped the major part and decided to run an ad which is extremely sexist, offensive and undermines the achievements of actor Priyanka Chopra. They have come up with the most disgusting way to grab eyeballs by focusing on her personal life. 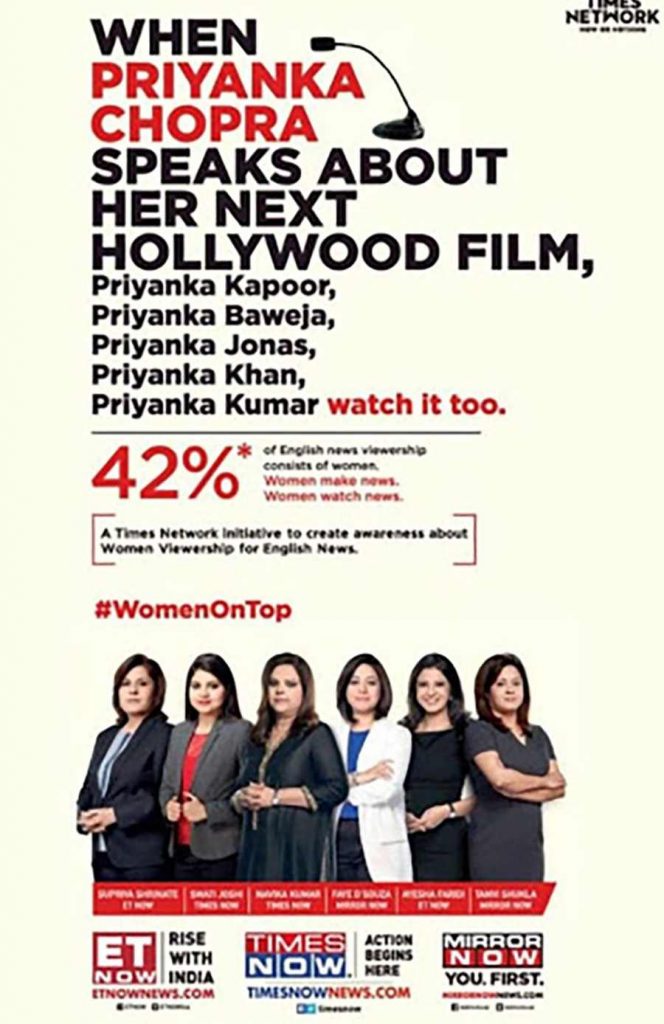 According to the print ad, 42% of English news viewership consists of women. And the ad starts with:

Basically, they were trying to say that when Priyanka Chopra speaks about her success, many other Priyankas watch it too. But all these Priyankas have last names of the men that Priyanka Chopra has reportedly dated. They have used Baweja, hitting at Chopra’s co-star Harman Baweja, Kapoor linking to Shahid Kapoor and of course, Jonas in the middle of the list.

Soon after the release of the ad, social media users started pointing out what’s wrong with it.

That Times Group ad is disgusting! Not only are they degrading Priyanka but they’re degrading women in general. Shame on @TimesNow!

It is distasteful for sure! Like ugh but I really don’t understand what this ad is about??

Correction- Remove Times Now & its other nows since I had mistaken the stupid ad of Times Now over priyanka Chopra as Advertisement. However, by using her fame, they are indirectly promoting her which is totally wrong on the part of Times Group. https://t.co/CE5XPaBIK3

@TimesNow @ETNOWlive @MirrorNow most disgusting level of patriarchal pigs designed the ad that shamed @priyankachopra. Because this women has achieved what the men in your network nevr had the balls to. #shameoneyoutimesnetwork pic.twitter.com/WbnTNcSwnT

This @TimesNow, @MirrorNow , @ETNOWlive ad is so ironical to its tagline #WomenOnTop! It reeks of sexism, misogyny and patriarchy! @fayedsouza should reprimand her own channel people now! @priyankachopra pic.twitter.com/RcC29DSyVz

That Times Group ad is disgusting! Not only are they degrading Priyanka but they’re degrading women in general. Shame on @TimesNow!

An ad slandering a woman, just to uplift another…. @TimesNow pic.twitter.com/RMsV51ncFi

NO idea who designs your ads, @TimesNow, @MirrorNow, @ETNOWlive — but just FYI types, this is really, really messed up on MANY levels. Especially since you’re saying #WomenOnTop. Why target @priyankachopra? pic.twitter.com/uDXpblduZb