In a bizarre move, the headquarters of Kerala Pradesh Congress Committee (KPCC) in Trivandrum has been put on sale on OLX. Indira Bhavan, the headquarters of KPCC, has been pegged at a price of Rs 10,000. The ad has been posted by a user named Aniesh who has requested buyers to contact the Indian Union Muslim League (IUML) or KC(M) to take things further. Along with the photo of the building, the advertiser posted that the property is “ready to move”. 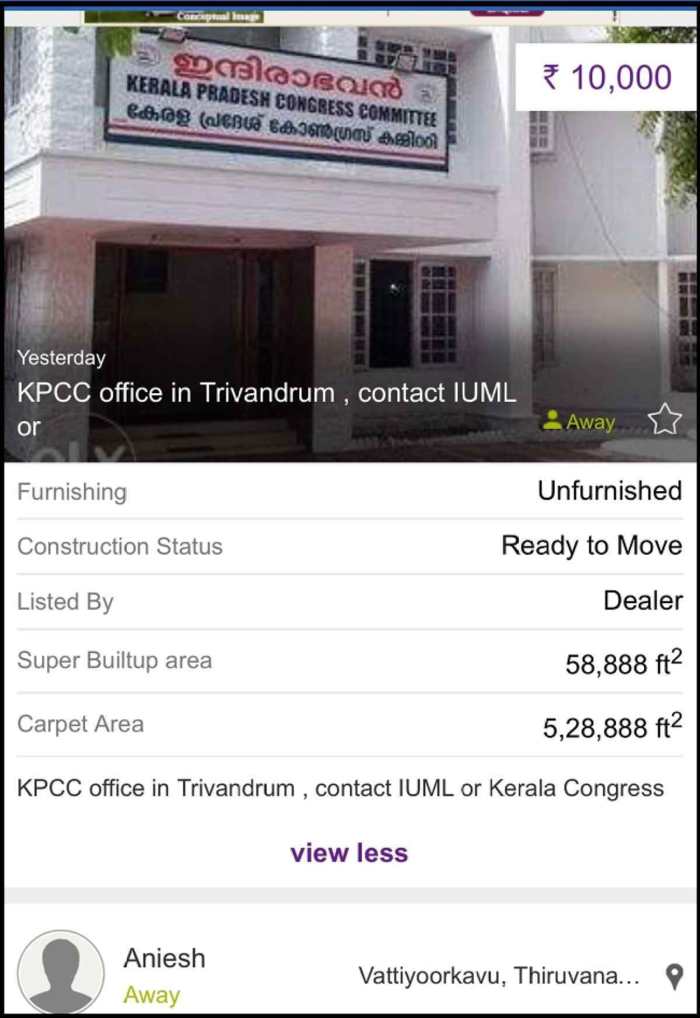 The advertisement was posted on Saturday night after the Kerala unit of the Indian National Congress (INC) announced to give away the Rajya Sabha seat to Kerala Congress (Mani) (KCM). Many Congress leaders were against the move and made their dissent clear to senior leaders as well.

The post on OLX seems to be the effect of the decision taken by the Congress party in Kerala. As per The News Minute report, in a letter addressed to party President Rahul Gandhi, six MLAs wrote: “I do express my utmost disappointment and strongest protest on the Kerala leaders’ decision to give away our Rajya Sabha seat to the Kerala Congress(M) party, which is not even a constituent of the UDF in Kerala as of now.”

In the letter, it was also stated, “This has betrayed the sentiments of the ordinary Congress workers in Kerala and is a huge humiliation to their spirit. I, therefore urge you to reconsider this catastrophic decision at the earliest and field a Congress candidate itself for the ensuing election.”