As the country is facing scorching heat, people are coming up with strange methods to impress rain god. In a bizarre ritual, two frogs were married off in Madhya Pradesh’s Chhattarpur by a BJP Minister.

It is believed that the marriage of frogs makes Indra Dev (God of rain in Hindu mythology) happy and the city would get a better monsoon. Following the ritual, minister of state for women and child development Lalita Yadav along with other local BJP leaders too organised the marriage ceremony of two frogs at a temple in Chhattarpur. The wedding was followed by a grand feast.

According to Hindustan Times, temple priest Acharya Brijnandan said, “The frogs’ marriage and a feast is a very old tradition to please gods.” 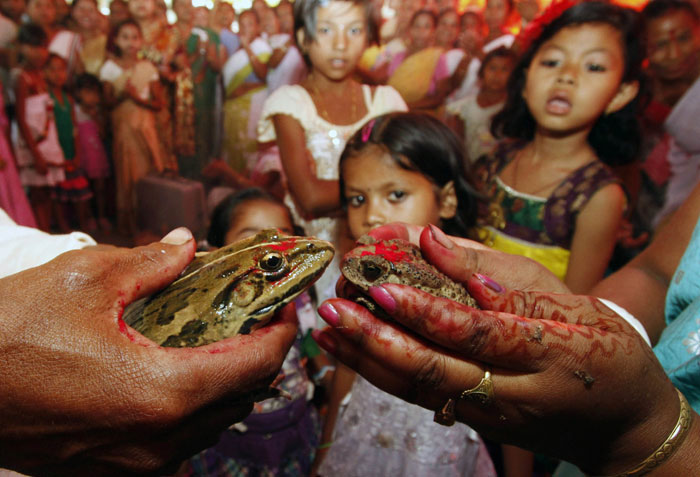 The wedding of frogs happened with all the rituals. The frogs were placed in plates decorated with garlands and a priest was chanting Sanskrit verses.

Not just in MP, a group of people in Uttar Pradesh’s Varanasi also organised a wedding of two plastic frogs. Hundreds of people gathered at the temple premises to be the part of the wedding. They also performed a special hawan post the wedding to please the rain gods.

“We want rainfall in the city. It’s an old belief that the wedding of frogs makes Indra Dev happy. We have been affected by the blistering heat. It is raining everywhere but not in Varanasi. So, we organised this wedding, requesting Indra Dev to hasten the arrival of monsoon in the city,” an organiser told news agency ANI.

But as incredulous as it may sound, frog wedding is not new in India. In 2009, residents of Jharkhand’s drought-hit Chatra district also organised a similar wedding which also included a feast for 500 people, invitation cards and a car for the groom. In 2014, a group of farmers arranged frog marriage in Nagpur to please the rain gods and ensure a good harvest.