Two Ghana footballers came to India hoping to realise their dream of playing for one of famous clubs of Kolkata but destiny had something else in store for them.

Richard Teyi Akumiha and Teti Philip Aadza, two national level footballers back home, left for Kolkata on the faith of a local agent who promised them a trial opportunity at famous football clubs of West Bengal.

In case if you didn’t know, a lot of players from Africa come to the City of Joy every year to give trials at different Kolkata clubs, including East Bengal, Mohun Bagan and Mohammedan SC.

Also Read: Brazilian star Kaká retires: Here’s all you need to know about the footballer

The local agent, who goes by the name of Subrata, allegedly took $500 dollars from the players. Little did the duo know, they were being taken for a ride. 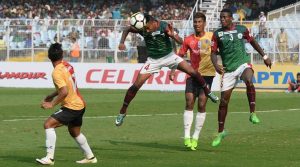 Upon their arrival in November, the footballers were shocked after they realised that they had been cheated. Since then duo has been forced to roam on the streets of Kolkata.

So far, no club has offered the duo any opportunity and soon their visa will also expire.

“Not a single Kolkata club has provided a trial opportunity to the Ghanaian pair, and two months since they reached India, their visas are about to expire in a week,”  The Times of India reported.

Stuck in such situation, the footballers have started asking for money from Ghana. Realising it’s a not a long term solution, they are pleading the local football clubs to give them one opportunity to prove their mettle.

Also Read: Was this Kashmiri girl footballer really a stone-pelter?

“For once at least give me a chance. I would not disappoint you,” pleads Aadza, who has played for the Under-20 Ghana football team.

If they fail to return to their native land within a week, they could be in danger of getting arrested.