Mahendra Singh Dhoni, the Chennai Super Kings (CSK) skipper, is known for his calm and composed appearance on the ground. Though he does lets his emotions loose at times, watching him turn mischievous during a live match is still pretty rare. He is indeed one of the brilliant brains on the field and at the same time, he knows how to surprise his teammates as well. Recently, Ravindra Jadeja was one of those who was left flabbergasted with Dhoni’s act while the commentators couldn’t control their laughter.

While playing against Sunrisers Hyderabad (SRH) on May 13, Dhoni took a moment to scare Jadeja on the field. During the 7th over, Shikhar Dhawan played a delivery off Harbhajan Singh towards the mid-wicket region. Since the fielders were far away, Dhoni himself rushed towards the ball. Meanwhile, Jadeja came running from the deep mid-wicket area. Till then Dhoni had the ball and when he saw Jaddu in front of him, he pretended to hit Jadeja with the ball.

After successfully scaring Jaddu, Dhoni turned around with a smile on his face while the left-arm spinner was still holding his defensive position. 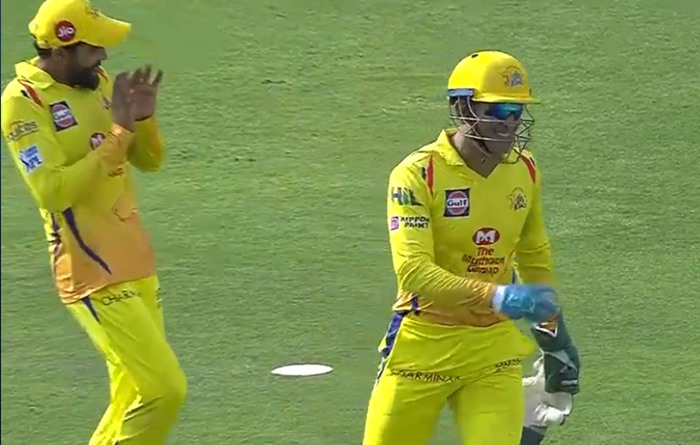 It was yet another unpredicted activity from the Chennai skipper which not only put a smile on the faces of players but entertained the viewers as well. However, it was more amazing than his blinders run-outs.

Earlier today, MS Dhoni won the toss and opted to bowl first. SRH has already qualified for the playoffs while CSK is next to the Orange Army, making their way to the knockout stage.