Virat Kohli is currently leading Royal Challengers Bangalore (RCB) in the eleventh edition of the Indian Premier League (IPL). Despite going through a rough patch in the tournament, they haven’t lost the hope of coming back strong. The entire unit has been sweating hard in the nets ahead of the next game against Kolkata Knight Riders (KKR).

We all have seen Virat hitting the nets with his cricketing gear on many occasions. But have you ever noticed the thigh pads he uses? That particular gear of the RCB skipper carries an autograph. So, have you ever wondered whose signatures are they? 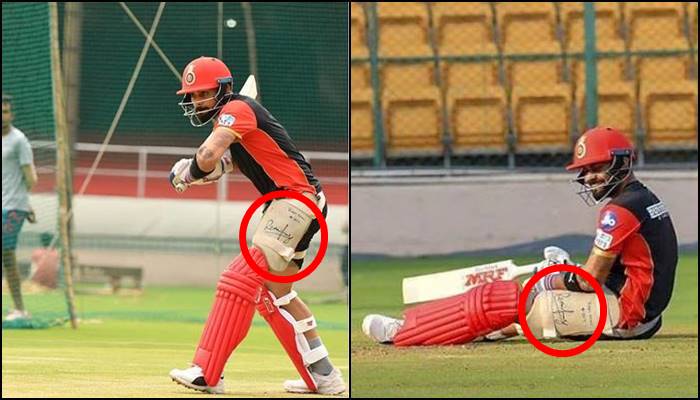 If your guess is that it is an autograph of a legendary cricketer then you are quite wrong. It actually belongs to the manufacturer – ‘Remfry’ which makes these thigh pads. Owned by Steve Remfry, ‘Remfry Cricket’ has been manufacturing custom-made cricketing gears since 1987.

According to several reports, back in 2016, Kohli first used these gears and since then, he has been regularly using them. In June 2017, the manufacturers shared a picture of Kohli donning Remfry thigh pads and they termed him ‘the world’s best batsman’.

The next surprising fact about these gears that Virat is not the only cricketer who uses them. Cricketers like Jos Buttler, Quinton de Kock, Steve Smith, Shakib Al Hasan and Yuvraj Singh have also been using thigh pads from the same manufacturer.

If it is in the slot for @josbuttler, it’s going a long way!

A post shared by Royal Challengers Bangalore (@royalchallengersbangalore) on Apr 24, 2018 at 7:34am PDT

Well, that’s not all. Some of the former legendary cricketers like Kapil Dev, Craig Mcmillan, David Boon have also used the Remfry products during their career.