MS Dhoni, the Thala of every Chennai Super Kings (CSK) superfan, has been winning a million hearts with his gestures for quite a long time now. On the cricket field, his wittiness leaves no stone unturned to entertain the viewers and when he is away, his is believed to be one gem of a person. His humbleness towards his juniors from the cricket fraternity has helped them in their careers and the entire world has witnessed several examples. Adding one more to that is today’s incident where Dhoni was spotted sharing some wicketkeeping skills with young Mumbai Indians (MI) wicketkeeper Ishan Kishan.

After losing the game to MI by 8 wickets, CSK skipper MS Dhoni had a discussion with Ishan. Probably Dhoni would have given him some crucial tips of flawless wicketkeeping and the young gun from Jharkhand surely have jotted it down in his mind. Well, his gesture says so in this picture which was shared on the official social media handle of the MI franchise.

Learning a trick or two from the best in the business! The Jharkhand boys – @ishankishan23 and MS Dhoni bond after the game. #CricketMeriJaan #MumbaiIndians #CSKvMI

During the game, there was a moment when Ishan had a chance to stump the man out who has been doing marvels behind the stumps for the team India. But Dhoni was fast enough to put his bat inside the crease. He got himself into the safe zone moments before Ishan could dislodge the bails. The young MI wicketkeeper later regretted missing that big opportunity. 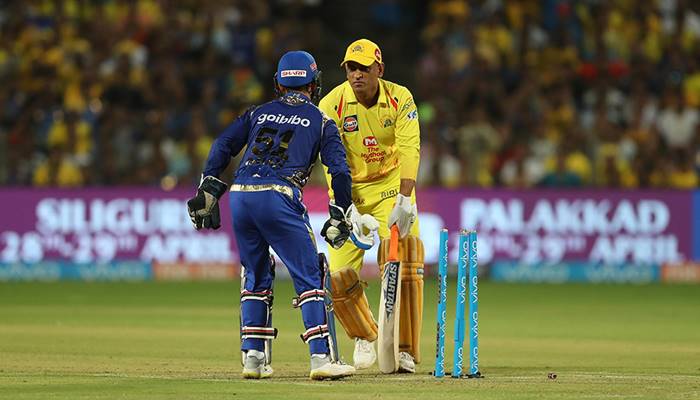 MS Dhoni while batting against Mumbai Indians in IPL match no 27/ Photo: BCCI

Soon after that instance, MS Dhoni was hunted down by Mitchell McClenaghan on 26. CSK scored 169 runs in 20 overs but failed to defend. A magnificent fifty from Rohit Sharma won the second game for MI with 8 wickets remaining.