From where we live in, what we eat and what we wear, it is hard to imagine that some people in other parts of the world might not be doing the same. We do acknowledge the presence of diversity in cultures, but there are some traditions that would seem outright bizarre to our urbanised senses. It is hard for us to imagine a place where it is normal to steal other’s wives or eat the dead body of their own tribesmen. Here are some of the weirdest tribal traditions from around the globe that are way more intense than our own.

Among the Mursi, Chai, Suri and Tirma groups in Africa, it is a traditional norm for the women to wear a piece of large pottery or wooden discs or ‘plates’ in their lower lips. To an outsider, it may appear a kind of body mutilation, but for them, it serves as an expression of female maturity. It is usually done by the mother or another kinsmen when a girl is about sixteen years of age. Initially, the cut is held open by a wooden plug until it heals. And then they progressively change the plates for larger plates. Most of them go till discs up to 10-15 cm in diameter that can fit into the lower lip. 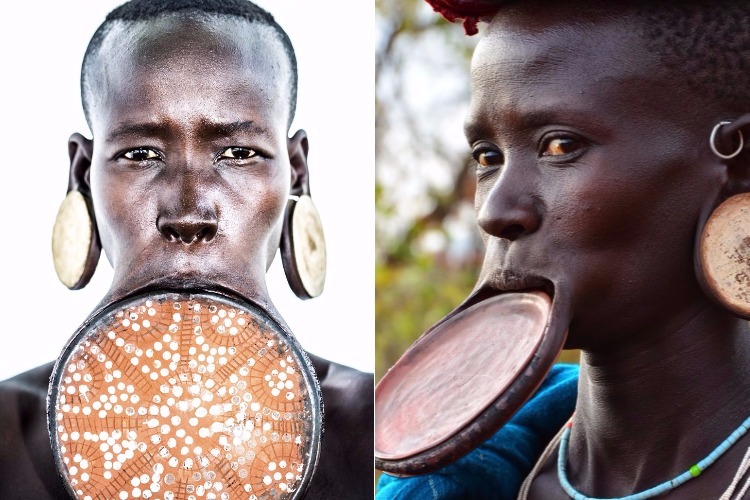 ALSO READ: From horns to Elf ears, 9 weird body implants that will make you cringe!

You think our beauty standards are too much to handle? Wait till you hear this. The Kayan women of eastern Burma wear brass rings around the neck as a sign of beauty. The brass rings are supposed to make their necks look longer. The longer it is, the more beautiful the girl is considered to be. They start wearing brass rings around the age of five and the process can take hours. The pressure of the rings pushes the rib cage down to make the neck appear longer. A full set of the rings can weigh as much as 10 kilograms! 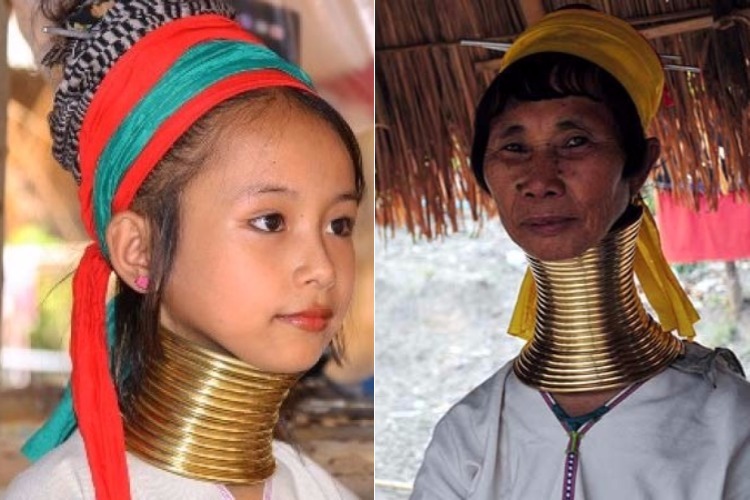 The Kaningara people of Papua New Guinea follow this tradition of skin cutting or scarification to mark the transition from boyhood to manhood. The process involves creating patterns of cuts on the chest, back or buttocks which may take up to several months to finish and another few months to heal. The bloody body modifications are held in the Spirit House and it is strictly forbidden to women. 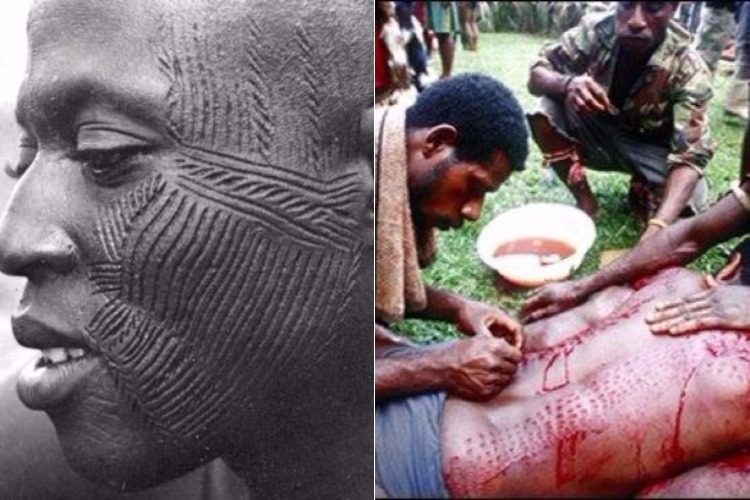 Have you ever been so overcome with grief at someone’s death that you cut off your finger? We hope not. For the Dani tribe in Indonesia, finger cutting or Ikipalin is a typical mourning practice where the tribe will cut off a portion of every woman’s finger who was close to the deceased. The more people you lose, the more she loses a part of herself. It is symbolic of the pain of losing someone. Before the process, they tie a string tightly on the upper portion of the finger to make it go numb for a painless removal. After cutting off fingers, it is cauterised to prevent bleeding and to form new-callused fingertips. 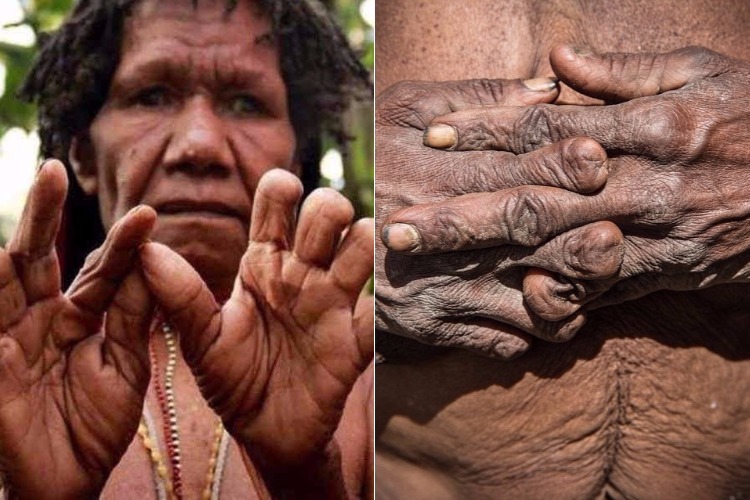 The Yanomami tribe who live in the Amazon rainforests eat the flesh of their dead relatives which they believe preserves the tribe’s unity. The body of the deceased is first burnt in a pyre and then second part consists of cooking bananas, mashing them and mixing them with the ash and bone of the dead which is then served to the villagers. This according to them absorbs the soul of the tribe member into the tribe again. 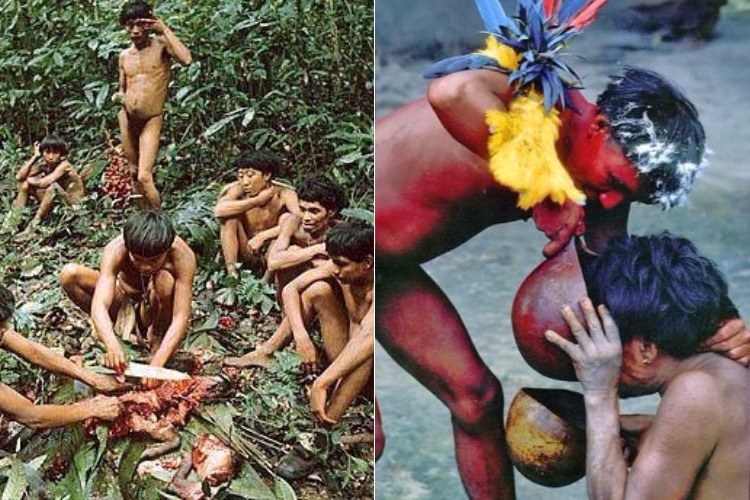 Living with the dead

In the Toraja region of Sulawesi, Indonesia, living with dead members of the family for years after their death is not unusual. It is believed that the dead are not truly gone until a water buffalo has been sacrificed at their funeral to serve as the vehicle for the afterlife. The dead bodies are injected with a preservative called Formulin, which stops the bodies from decomposing and they are washed and clothed regularly. They have a room of their own where they are served food and cigarettes two times a day. They even have a bowl in a corner of the room which acts as the toilet. 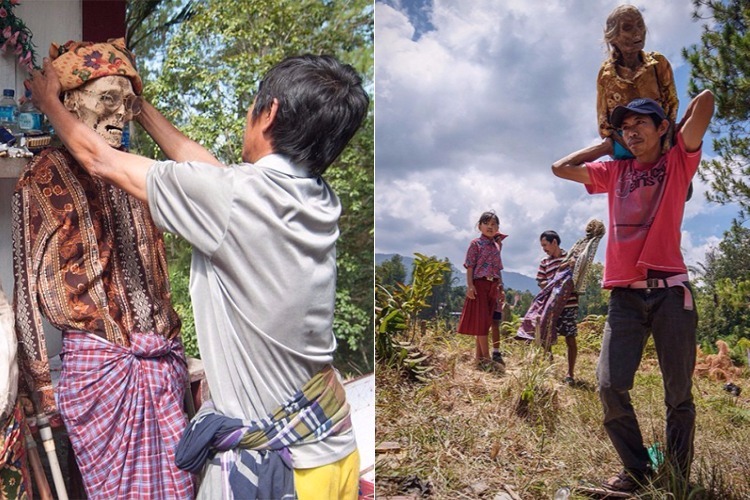 Living with the dead

ALSO READ: 11 weird sex laws from around the world that’ll blow your mind

The Satere-Mawe people of Brazil follow the initiation rites of wearing ant-gloves in order to become ‘real’ men. You may think that ants are a no big deal but you cannot be more wrong. The bullet ants’ sting is venomous plus the sting pain is equal to the pain of being shot by a gun and hence the name, bullet ants. The person is supposed to slip their hand inside the glove filled with ants and keep it there for ten minutes. After 10 minutes the hand is completely paralysed and it takes days before the pain goes away. On top of that, they have to repeat the ritual 20 times over the course of months or even years. 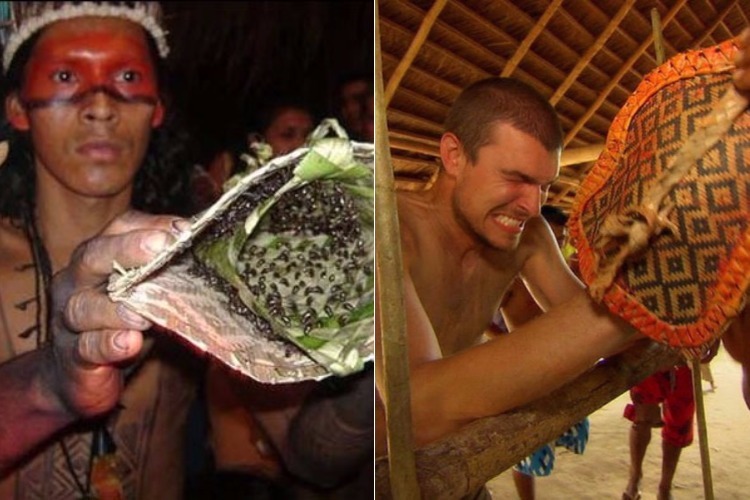 In Sambia tribe of Papua, New Guinea, when a boy turns seven, he is removed from the presence of all female (as it is believed that women can be dangerous to men) and supposed to consume semen of an older man for the next ten years. This marks their rite of passage from boyhood to manhood. Young boys have to accumulate semen either by receiving oral penetration or by swallowing the ejaculations of older males. It is believed that they become excellent warriors if they ingest large quantities of sperm. 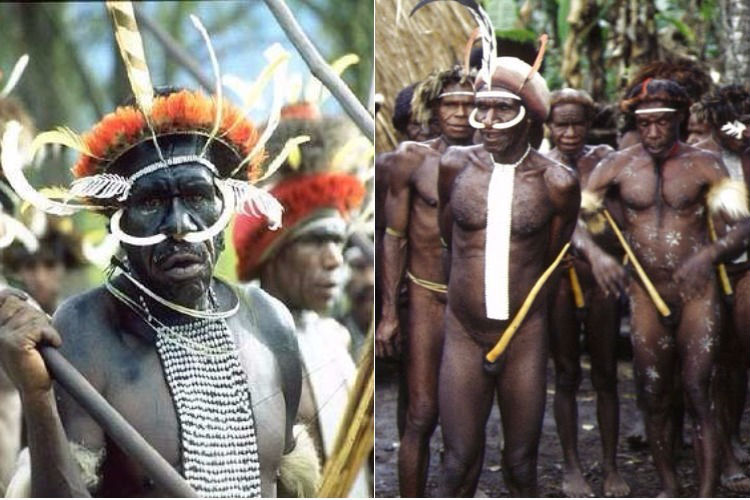 Among the Wodabee tribe, there is a wife stealing ceremony in which tribe men put on a spectacular show to impress the women in a festival called Yaki. While some women leave their first husband to pursue the second one, some like to have both the husbands at the same time. The men have elaborate makeup on such as red faces and black lips and it takes them over 6hours to get ready. Men who can roll their eyes while grinning simultaneously are considered attractive. Other desired qualities include light skin, thin lips, long jaws, and white eyes. A woman is allowed to sleep with as many men as she wants until she can find a perfect match. 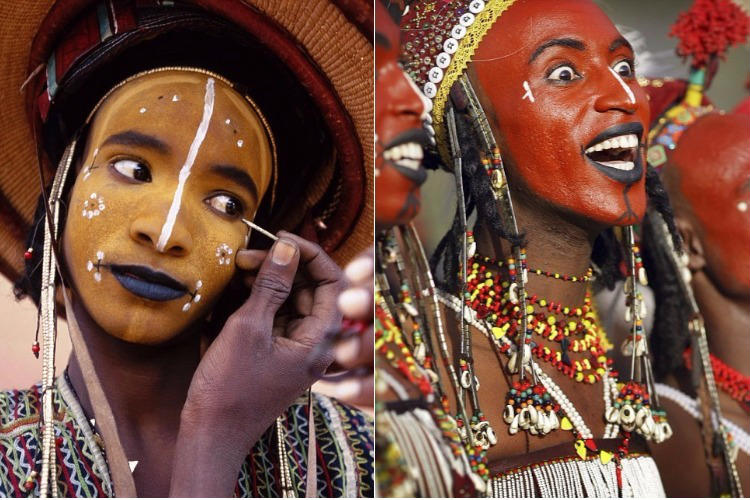