Priyanka Chopra never fails to impress fashion police with her style statements. Whether it was at Met Gala 2017 or Jimmy Kimmel Live, she just makes sure to remain in headlines for her outfit. After rocking Ralph Lauren trench-coat dress at Met Gala 2017, she yet again flaunted her glamorous avatar. PeeCee recently made her third appearance on Jimmy Kimmel Live show to promote her debut Hollywood movie — Baywatch.

She was seen in a gold and black sequined striped dress. We must say, she was looking absolutely gorgeous. Later, she wore a black leather jacket and retro sunnies and, once again she was looking stunning. Simple makeup with brown lips, Priyanka Chopra donned straight hair look.

After making her statement in gold-sequinned number, she wore a semi-sheer black floor-length halter dress. Well, she is rocking in the west too and it can clearly be seen with her becoming the face for six magazines in May.

Recently, Priyanka Chopra was seen in South Africa where she was present as the UNICEF ambassador. At the event, she spotted wearing a beautiful black saree. But the highlight was her blouse which has the Bengal Tiger printed on it. It hand-painted, and not a graphic print and was going well with her saree. The outfit, from the house of Sabyasachi, showed India’s national animal–the tiger. 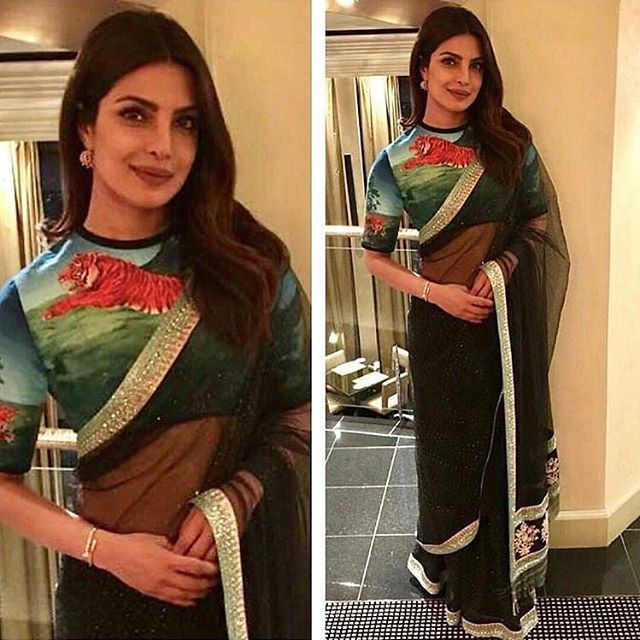 This was Priyanka Chopra’s third appearance on the Jimmy Kimmel Live. Earlier, she appeared in September 2015 for promoting Quantico and made her second appearance after winning the People’s Choice Awards in January this year. For now, she is busy in promotions for her Hollywood debut film — Baywatch, which is all set to release on June 2.