If you cannot be a wordsmith, be a song. The life of Ruskin Bond is nothing less than a fable. A prolific storyteller he has filled Indian children’s life with the sights and smells of alluring mountains and elegant plains. Grumpy face, wearing signature ‘Woody Allen’ glasses he looks like his favorite character, an 81-year-old shaggy and lazy grandpa.

An eremite, he was born in the rapturing city of Kasauli in Himachal Pradesh and never left those foothills since then. ‘Mr. Bond’ as he is lovingly called by his readers, he started his writing, err, novel writing career in London of 1956. The to-be-man-of-letters received £ 50 for his first publication ‘The Room on the Roof’ and today he is most adored author of India.

He has spoken over the years that he became a writer because he was a voracious reader. He lives alone in Landour and his musings with the forests of Dehra, the books in a school library, compulsive scribbles, and nostalgia always surrounds his writings. He cites Alexandra Wentworth’s Ali in Wonderland: And Other Tall Tales as his favorite book and it was also the first book he read.

Mussoorie, Shimla, and Dehra are perennial characters of his stories.

Bond’s stories are set in a small town India usually in the backdrop of Himalayas. People know each other by their names and their mutual friends. Mussoorie, Shimla, and Dehradun are perennial characters of his stories. He spent his entire childhood in these foothills and he weaves their essence in his words. 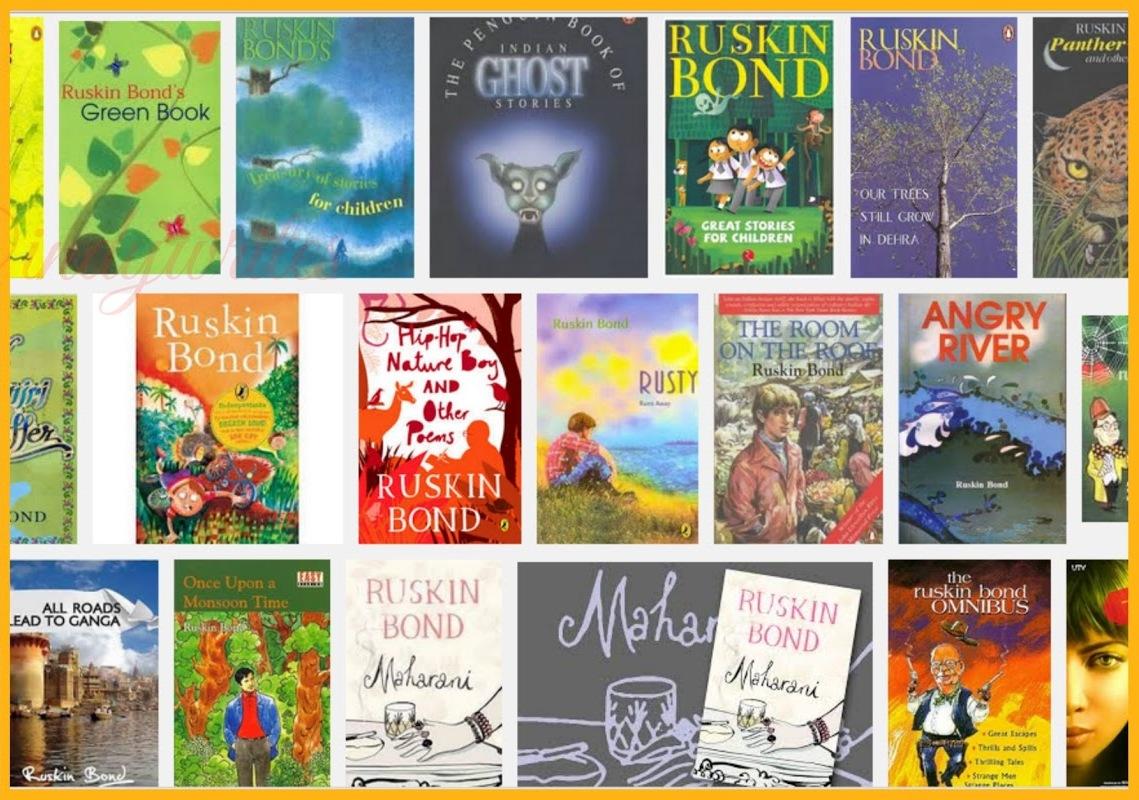 The vivid and colorful world of Ruskin Bond.

His graceful and simplistic style of writing captures the nuances of readers. His world is simple, where the ‘universe ends beyond the third lane’, and children dream and ponder over myriad concerns like how trees grow and where do fireflies come from.

Children’s favorite writer, he knows what transpires in their lives. The insecurity of lying and getting caught, the unutterable fear of darkness, friendly pythons and frisking monkeys are centric to Bond’s themes.

“People still ask me about that girl in that story.” — on The Night Train At Deoli

Grandpa pats on the cub’s back and he is completely safe from the ordeal, the girl on the platform is selling baskets, the food grandma cooks is an irresistible draw upon an impecunious relative. There are trees, there are birds, there are flowers–life is fulfilling and complete.

His stories may be ‘genuine lies’ as he refers to them as, but they have autobiographical elements in them, and he visits the memory lane to suit his narratives. They are absorbing, full of interesting characters he has personally encountered in his own life. His tales retain worldliness of a child’s imagination, the ladybugs rival adults for attention, and bring the readers to terms with change, the inevitable companion of time.

In our new Friday series ‘Writings from India’ we offer to you reminiscences of the finest characters penned by Mr. Bond which provide an escape from the harsh reality of life and to transport us to another world, without the complications and trappings of the modern day life.

Mr. Bond’s alter-ego is a highly imaginative and curious boy who encounters most amusing of things to happen to a child. His exciting escapades, his development from early childhood to early teenage, his assortment of peculiar animals will make you curl up the book every time you want to get cheered.

“Rusty is all about the winning of friends,” said Ruskin Bond. “Rusty [is] a sensitive and often lonely boy.

The girl in The Night Train At Deoli

The girl with the basket stands on the platform, waiting for Ruskin to get off the train and take her by the hand and walk away with her. She is the lover we have all yearn for but never attain. You will see on the platform at Deoli selling baskets. You will instantly fantasize about meeting her. But you cannot pursue her. She is a song which vividly depicts profundity and flux of human emotions.

Miss Mackenzie, The Prospect of Flowers

Miss Mackenzie’s tale is one of loneliness, friendship, and nature. One read and you will happen in love with her. Ruskin’s anguished lady is based on Miss Bean, his neighbor in Maplewood Lodge when he first arrived in Mussoorie. Her visitor in the story Anil was actually Ruskin’s roommate who attended the hill school with him.

She lives on a small pension in a remote cottage surrounded by her garden. While her fading life symbolizes the end of an era, she has something valuable to offer to the boy who trespasses in her garden. Anil represents youth, energy, and curiosity–something that has long faded in Miss Mackenzie. Their friendship is a touching reminder of the interdependence of old and the young. An era that has long passed enriches the one still blooming.

“Miss Mackenzie is far from being the typical frustrated spinster of fiction.”

Grandfather appears in many of Ruskin Bond’s stories. He is a colorful, good-humoured character, who was probably nothing like his original grandfather. He was based partly on hearsay, partly on what Ruskin wanted him to be. He lost both of his grandfathers before he was even born. He always wanted to have one and thus made him up.

“Grandfather [is] eccentric. He loves animals. [He] speaks tiger’s language . . . [develops] rapport with him.”

Hassan, The Garlands on His Brow

Hassan is small-town wrestler admired for his skill. At the prime of his career, he succumbs to the sexual advances of Rani and eventually gives up wrestling. But Rani dies and he is back in the akhara. Wrestling is not the same since then. No more an art, it a competition. And he serves as a fodder to the new wrestlers. He is reduced to beggary. His story tells us how society forgets its heroes–they are ignored forgotten and left to die.

“Life has become fast and cruel and unreflective, and people . . . too busy counting their gains to bother about the idols of their youth.”

A kite maker, he evokes nostalgia for the past craftsmen. He once designed rare kites that resembled dragons and created music which is no longer patronized. People do not have time for leisure or open spaces for such sports in a swiftly changing and competitive world.

“When Mehmood was younger and had fallen sick, everyone in the neighbourhood had come to ask after his health; but now, when his days were drawing to a close, no one visited him.”

To the tales of small-town, To the mice who roar, and elephant which soars, and to all those trees that grow up in the sky, to the teachers lost in the post, dreamy windows, serene valleys, the forests of Dehra and to never growing old, eternally 15-year-Ruskin. Cheers! Forever and ever.