When Han Kang’s surreal and intense novella The Vegetarian was published in 2007, it baffled the readers. How could an award-winning and respectable author like Ms Han write something so bizarre? The book caused a stir in literary circles. An amalgam of sensuality and domestic violence, it is a story of a melancholy housewife Yeong-hye who suddenly decides to become a vegetarian. At first, her otherwise extended family dismisses it with casual disdain. But then it sets off a chain of catastrophes.

“It was received as very extreme and bizarre. Definitely, readers were surprised.”–Han Kang 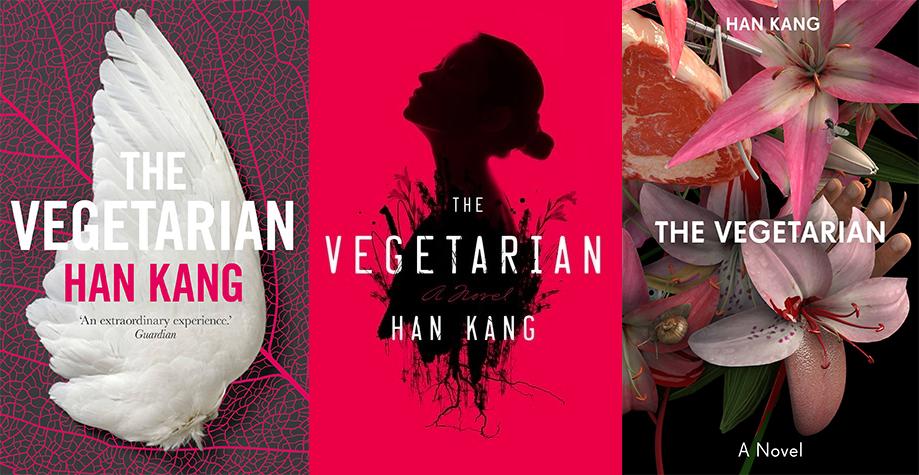 The covers for UK, USA and Australia edition capture the surreal essence of the novel.
(Photo: Cover, Portobello Books)

The Vegetarian doesn’t advocate vegetarianism. It is subtly about abstinence and restraint. Yeong first repudiates from eating meat, she spirals further to turn reclusive to humanly activities, abandoning her own body and existence. At one dinner acquaintance she declares:

“I’d hate to share a meal with someone who considers eating meat repulsive, just because that’s how they themselves personally feel . . . don’t you agree?”

Han Kang spent three years writing her novella in a three-part-zigzag of a drama, firstly written as three separate works. It is told from the viewpoint of Yeong’s lousy husband, who works at an office and views her metamorphosis as an act of rebellion; her brother-in-law, an artist who is obsessed with her decrepitating physique and coerces her into a world of explicit videos; and her overburdened older sister, who manages a cosmetics store. A parable to change and dendrophilia, it is gracefully written yet extremely disturbing tale of unhinged hope to transform into a tree.

“Can only trust my breasts now. I like my breasts; nothing can be killed by them. Hand, foot, tongue, gaze, all weapons from which nothing is safe . . . ”

Her sudden realization that her old self is disappearing is disconsolate and glum and invokes pity from the readers:

“Why am I changing like this? Why are all my edges sharpening — what am I going to gouge?”

There is pattern Kang uses in her language–of anguish and desolation: a dying bird hidden in a clenched fist, an IV bag half full of blood, painted flowers on a naked body, the unremitting stench of sizzling meat.”

“I was thinking about the spectrum of human behavior, from sublimity to horror, and wondered, is it really possible for humans to live a perfectly innocent life in this violent world, and what would happen if someone tried to achieve that?”

Kang was born in Gwangju in 1970. Her father too was a novelist but struggled throughout his life to make a living out of it. “It was too much for a little child, but I was alright because I was surrounded by books,” she spoke in an interview with The Independent. 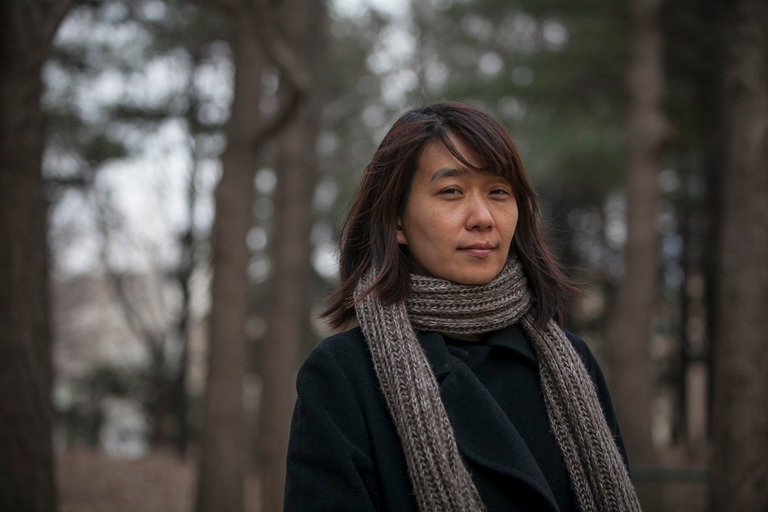 She was nine when her family arrived in Seoul, mere four months before the uprising in 1980. She remembers how government troops attacked pro-democratic protesters, firing on the innocent crowds, and brutally murdering civilians. This crackdown left a deep mark on her, and she frequently pondered over the ideas of compassion and redemption. The original idea to write The Vegetarian came to her from these experiences. She found herself extremely attached to Yeong and thus chose to end the story on an ambiguous note.

“I didn’t want to describe Yeong-hye’s death, I wanted to keep her alive.”–Han Kang

Also read: Editor’s pick: 11 International Fiction books you must read the end of 2016

Yeong’s introspection is a fevered and enthralling revelation, full of lyricism and nihilism:

As Yeong transmutes, the language swifts. Metered prose, dense and bloody narrative, paraphiliac descriptions–phrase by phrase The Vegetarian is an exquisite experience.

‘The Vegetarian is the winner of the Man Booker International Prize 2016. Deborah Smith’s seamless translation made Han Kang, the first writer from South Korea to win the coveted award. It is also the first time the award has been allotted to a single novel rather an entire body of work, either originally published in English or translated following publication.’