In a clear show of conceited might, Hindu right wing group members disrupted a wedding of a Hindu woman and a Muslim man in Ghaziabad, Uttar Pradesh, on Friday. Mansoor Harhat Khan (30), an MBA, got married to 28-year-old Nupur Singhal, a doctor at a Ghaziabad court under the Special Marriage Act earlier on the same day.

However, when the reception was held around noon at the girl’s house at Raj Nagar in Ghaziabad, right wing activists, led by BJP Ghaziabad city president Ajay Sharma, came armed to stop the reception. Their claim? This was love jihad. The girl’s family even tried to reason that this was not a case of forced conversion and that the couple decided to get married with the family’s blessings. Yet, right wing workers were not convinced and continued their vandalism.

The father of the bride claimed a large group of BJP workers led by the city’s party unit chief, Ajay Sharma, and some people belonging to right-wing groups protested outside his residence on Friday and blocked movement of vehicles. Now, FIRs have been filed against them.

Three other Hindu right wing groups – Bajrang Dal, Hindu Raksha Dal and Dharam Jagran Manch – joined Sharma in protesting against the marriage. Refuting the family or the couple’s claims, Sharma claimed it was a case of “love jihad”, while police said the man and the woman were old friends and worked at a multinational company.

TOI quoted Bajrang Dal Meerut province convenor Balraj Dungar as saying, “We will not tolerate this at any cost. We will see how long they hide behind the police.” 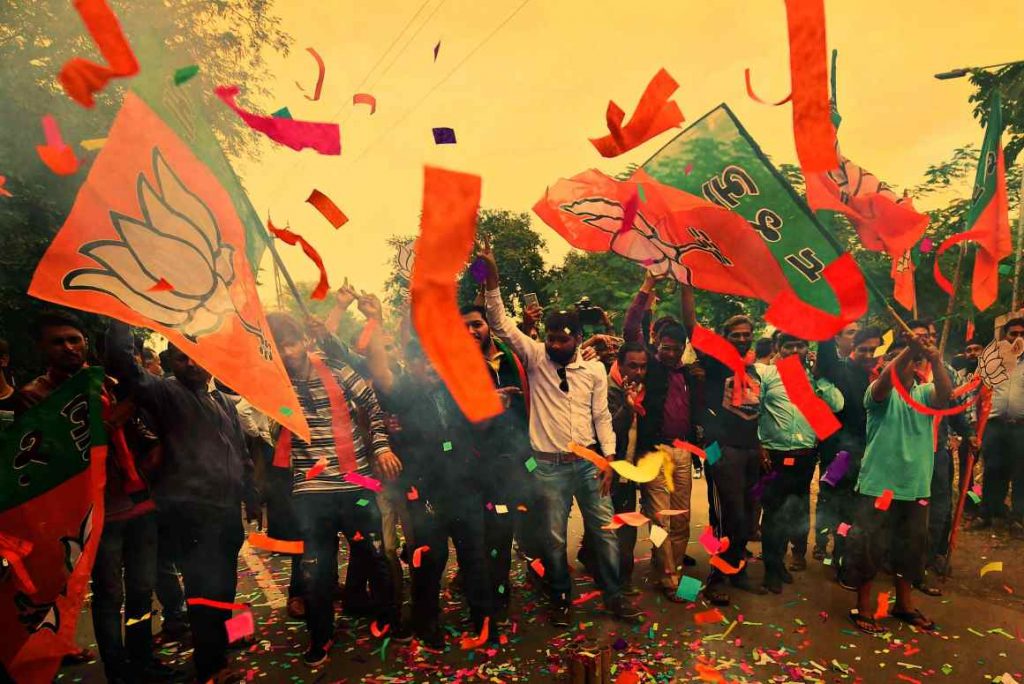 Police called in to control situation

After five hours of continued disruption, the police was called in to control the escalating tension. Police said they had to use mild force to remove the protestors as they were interfering in the personal lives of individuals. “How can [the] police allow people to barge into someone’s house? We got a distress call and performed our duty accordingly,” Superintendent of Police HN Singh said.

More than a hundred workers of the BJP and other right-wing groups were booked for allegedly disrupting the marriage, police said on Saturday.

Senior Superintendent of Police HN Singh said two FIRs had been registered against 113 people in connection with the incident under relevant provisions of the law.

The marriage was later solemnized in a court.

The unsettling fact that right-wing groups had such a huge say in the matter of two consenting adults charged the Twitterati. Most of them called out rightwingers for using their arm-twisting habits and disrupt a happy occasion for the couple.

Not my idea of India or that of any sane Indian.. Shameful.. this naked communal bullshit must end.. https://t.co/xBWT6Dzavl

When the BJP city president shows up with a bunch of thugs to stop a voluntary Hindu-Muslim marriage, how can you continue to pretend this is just fringe? “MNC staffers marry, Ghaziabad BJP cries ‘love jihad’ ” #DoltRight https://t.co/iUMkxfhsAV

Why are these thugs not in jail? Isn’t it against the law to interfere in the private lives of Indian citizens? https://t.co/T35tqbBTGd

BJP is a party of perverted, frustrated uncles who cannot keep their nose out of other people’s business.https://t.co/CraeK8u85J

Two grown adults have exercised their right to choose whom they marry, and some random, totally disconnected people, have issues with it! How is it anyone else’s business?

Fascists from India’s ruling far-right Hindutva party BJP and other Sanghi hate groups disrupted a wedding of a Hindu woman with a Muslim man, calling their marriage “love jihad.” They held a large sit-in protest outside the woman’s home in Ghaziabad, UP.https://t.co/avD6JaIXZO

Brave couple, need more of them. Hindutva terrorist created ruckus, even when it’s a court marriage with no religion involved. But they should know as long as we have a Constitution, they’ll get laathis only from cops. #LoveJihad #myth https://t.co/IETWfYq2q1

This is significant. BJP moving from

Colluding with overbearing parents of an adult woman to bully the woman and her Muslim mate. (despicable as it is)

Bullying couples where both families are cool with it. No conversion.