This Government should answer for the loss of a innocent life #WhoKilledRagu pic.twitter.com/S16oklqS4N

According to the Indian Express, Ragupathy Kandaswamy rammed into the AIADMK hoarding illegally put up to commemorate MGR centenary. However, The Hindu reported that ‘the Coimbatore City police on Monday claimed they had surveillance camera visuals of a lorry that ran over the youth…The driver of the lorry, M. Mohan (31) of Paramakkudi, has been arrested and sent to judicial custody till December 12.’

Just think about this .. what if the structures were not there and the Lorry came in the wrong direction .. @flytoragu might have had a chance to have an extra space to escape from the lorry.. accident happened right next to the structures #WhoKilledRagu 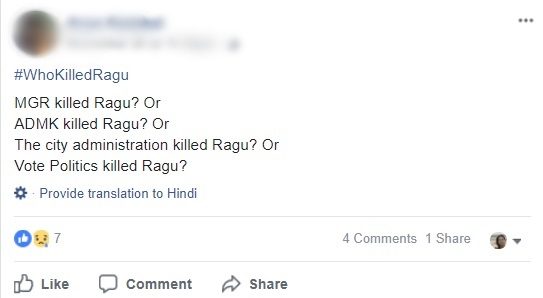 Please do share it in the public forum and do not say the structures are not responsible for the accident.. out of three lanes only one were available.. #WhoKilledRagu pic.twitter.com/xUC1Vonf82

The social media refused to take police’s claim and someone in the city painted ‘Who Killed Ragu?’ graffiti on the spot where Ragu apparently died. The photos of the graffiti and #WhoKilledRagu have been going viral.

According to a tweet by a Times Now journalist, the police has

Instead of acting against those who erected illegal arch that claimed the life of #Ragu… Coimbatore police picks up friends of #Ragu to question them about this #WhoKilledRagu graffiti pic.twitter.com/eSuyNPw8Y4

Coimbatore police shd track down all illegal polirical hoardings instead of threatening the person who painted ‘who killed ragu’..the political party is responsible for ragu’s death. citizen’s life has become so cheap? https://t.co/aXO40x7Dde

ALSO READ: This is the new normal. H’bad law student detained for sharing an anti-Modi article