A law student in Hyderabad was questioned for 17 hours for sharing a news article from a popular Facebook Page.

Here’s how the turn of events stacked up against Aarif Muhammad – a law student and a resident of Banjara Hills.

At 11:30 pm on Saturday, Aarif was picked up from a function by police officials in plain clothes. His crime? Re-sharing an article from catchnews.com posted by popular facebook page Voice of Ram. The article, titled, “Filmmaker announces Rs 1 lakh prize for throwing shoe at PM.” The article quoted filmmaker and activist Ram Subramanian as saying: “Since, it has become our culture to offer supari in public, here is mine. One lakh rupees reward. For anyone who throws a shoe at Narendra Modi in a public rally. (GST applicable.).” As an aside, the article has been taken down by the website.

Subramanian’s post was in response to several calls for beheading actor Deepika Padukone and filmmaker Sanjay Leela Bhansali in lieu of cash reward for starring in and making Padmavati, which allegedly distorts Rajput history. Apart from members of several fringe groups, a BJP office bearer from Haryana, Surajpal Amu offered a bounty of Rs 10 crore to anyone who beheaded Padukone. This prompted Subramanian to make this controversial post.

Aarif Muhammad added a comment to this post, which is what probably got him in trouble.  While re-sharing Voice of Ram’s story, he said “Guys…Modiji will be in Hyderabad on 28 Nov”.

Aarif was picked up at 11:30 on Saturday night by policemen in plain clothes. They dumped him at the Gachibowli Police station. There he faced several rounds of interrogation and was finally let off only on Sunday evening.

That PM Modi will be in Hyderabad on November 28 is common knowledge and is being reported by the media on a daily basis. US President Donald Trump’s daughter will inaugurate Global Entrepreneurship Summit along with PM Modi on that day.

He was detained by gachibowli cops by 11pm from a function. Whole night he was in the ps n then at 8am they shifted him to cybercrime office @commissionerate .Just now they released him after thorough interrogation regarding the fb n twitter posts about pm modi ji.

Apparently, the authorities wanted to ascertain if Aarif was the author of the Catch News article. 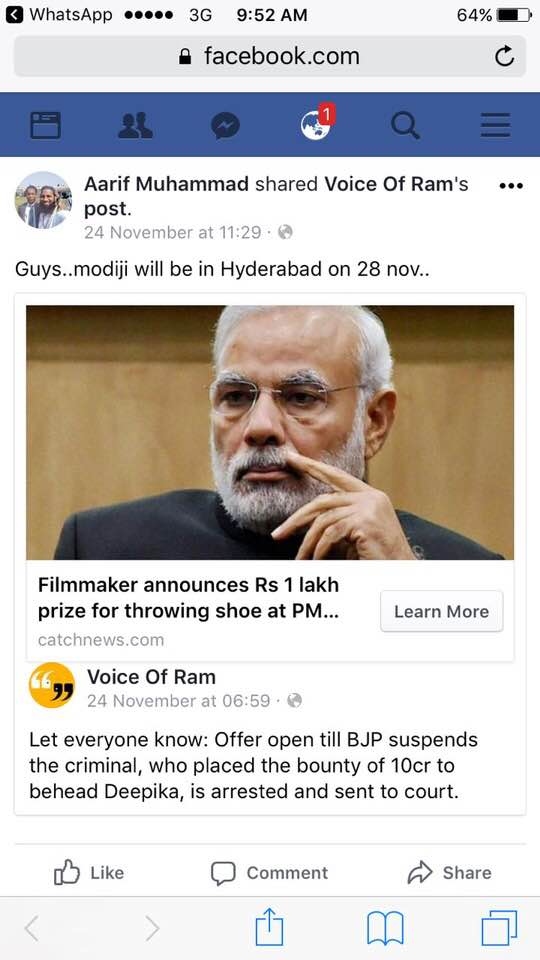 He was quoted by Times of India as saying:

I was interrogated through the night and I explained to police that I had only shared an article posted on a website. They wanted know if I had written the article and I clarified to them that I did not.

Aarif put out a Facebook post after his release, saying the Police was “very humble and polite”.

Subramanian, however, expressed shock at the fact that someone got picked up for questioning for something he had written. He was not aware of this. Speaking to InUth he said:

This is illogical and fear-mongering tactic. If they have an issue with me, they should chat with me. I don’t think anyone should be detained for something like this, but if they need to speak to someone it’s me and no anyone else. It’s like arresting someone for sharing a Zakir Naik video. What kind of message are they trying to send the citizens of the country.

He said, if the Police had any queries, he was free to be questioned. “It’s not like I am hiding somewhere, I am at work, I am freely walking around in Bombay, instead of questioning me, they are questioning a guy who has shared it. This is so wrong,” he added.