Late on Thursday evening, the administrator of Humans of Hindutva decided on deleting the Facebook page after having received several death threats. Writing on his website Satyanash, the administrator, who wishes to remain anonymous, wrote, “I’m quitting out of my own accord. I’ve not been banned or mass reported. I have recently received some threats to my life which I can’t take lightly.”

He went on to state, “I am outnumbered, live in a BJP state and come from a middle-class family with no political or police connections. I have no desire to end up like Gauri Lankesh or Afrazul Khan,” before revealing his intentions to delete the website too. “Congratulations to Hindutva on winning this David vs. Goliath fight.” 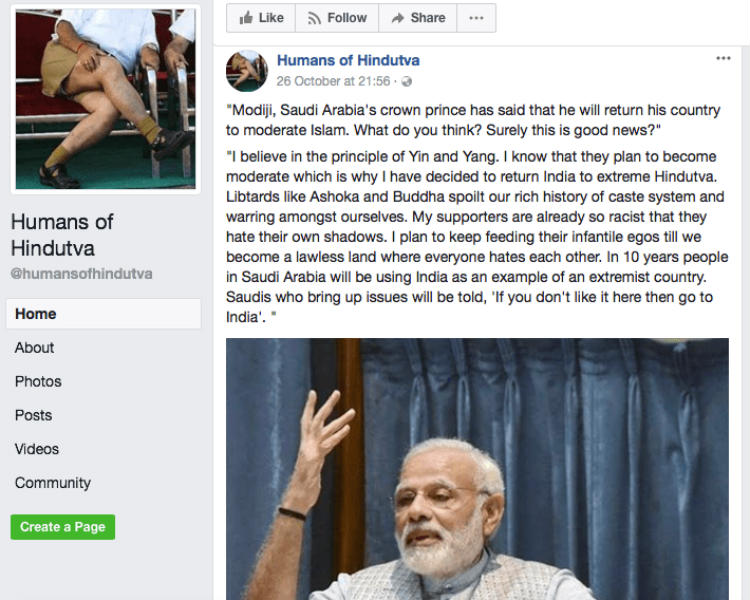 The administrator’s decision to kibosh the project, he so enthusiastically began some months ago, establishes yet again that India today may be too sensitive for political humour.

Guess no one’s having the last laugh here. Because we just don’t laugh anymore.#HumansOfHindutva you did your bit. https://t.co/6QQUCWqATs

So sad that the page called Humans of Hindutva had to be taken down. Freedom of expression is a joke in this country!

@narendramodi Sir, why force humans of hindutva to shut down ??? is it cause your party workers cant take a joke or is it that they are so illiterate to understand a joke ?? ppl are fed up wit your fake persona , do good and u will be blessed else the curses will continue

Because democracy for common people is to be denied freedom of speech and expression and for politicians is to openly give death threats #IncredibleIndia #HumansOfHindutva https://t.co/ix4KEqNBDB

It seems Facebook is increasingly becoming a platform for people who wish to divide people, and not for those who ridicule these divisive tactics.https://t.co/QMXZTps227

ALSO READ: ‘He was not married to any Hindu woman’: Family of killed labourer rubbishes ‘Love Jihad’ allegations

DailyO Editor Jairaj Singh‏ posted a tweet stating that the phone number of Humans of Hindutva’s administrator had made its way to trolls, who threatened his life.

Had a brief chat with my friend who runs the Humans of Hindutva page. He told me that trolls have got a hold of his phone number and they’re sending him death threats. He’s scared for his wife and children, so he’s shut the page for now. The nation can’t take a joke.

Back in September too, the parody page had decided to deactivate the page saying that he realised it was “not worth a bullet in my fucking head.” However, the page returned from its brief slumber after seeing the boastful response from right-wing supporters. “I guess to stop now would be to play into the hands of the fascists I despise so I guess I’ll keep this going for a little longer.” he wrote.

“I have received so many death threats that I have lost count. I have had so many strangers abuse my family that it doesn’t even rattle me anymore. I have had several people threaten to take me to court or file an FIR. All this for the simple crime of running a satirical page which takes pot shots at Hindutva (not Hinduism) and the politicians who cater to it,” he had written for The Wire back in October. 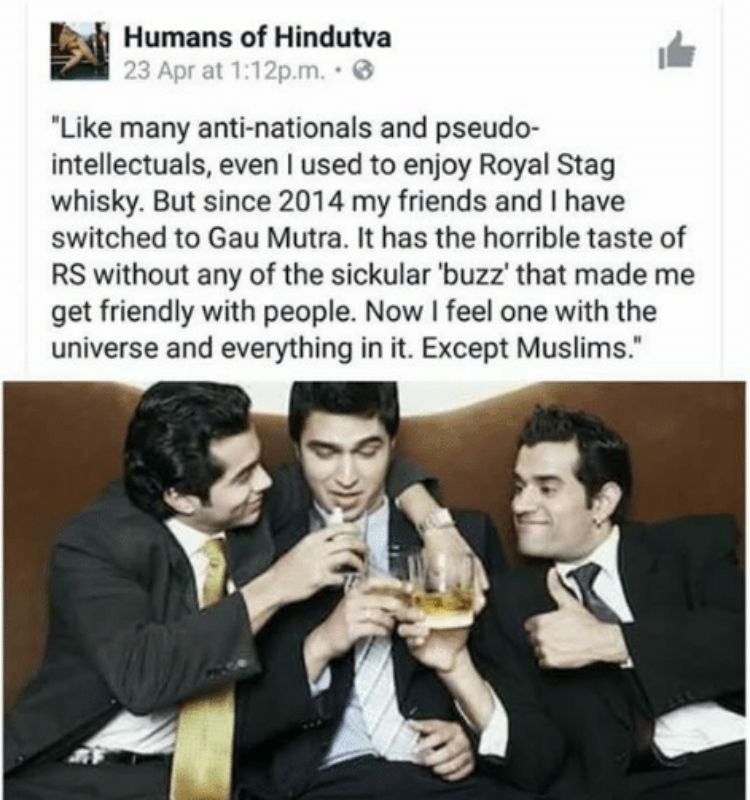 However, it now seems that the administrator has learnt that the playing field was never levelled, to begin with — a realisation which some deemed wise and others dismissed as cowardice.

You cannot fight from a room staying anonymous. Accept death or else get in line. #HumansOfHindutva

Lol
He is Cracking jokes on modi after Getting Death threats
Scared Admin of Humans of Hindutva. pic.twitter.com/B4ayGAFERi

Sorry folks, #HumansOfHindutva remains an anonymous troll whose word about threats cannot be taken on face value until he & his friends in media submit proof. He is a coward; there are hundreds of people in India who abuse the government without the cloak of anonymity.