The family of Mohammed Afrazul, a Muslim labourer from West Bengal, who was hacked to death in Rajasthan, have rubbished the allegations of the attacker that he was involved with a Hindu girl.

Nothing can be worse than this. Not just has been killed in the most gruesome manner, but his character has also been maligned. He used to live there with his son-in-law and had not been married to any Hindu woman. He was 50-years-old with grandchildren. He has been killed just for being a Muslim and nothing else.

Afrazul’s son-in-law Mosarraf Khan also rubbished the allegations. “We used to live together; he hadn’t married any Hindu lady. These allegations are absolutely baseless,” he told the news portal. “My father-in-law had been lured on the pretext of getting work and had been killed in the most gruesome way,” he added.

Also Read: Family of labourer axed and burnt in Rajasthan demand attacker to be hanged in public

Afrazul, who was the father of three girls, was scheduled to leave for home later this month to arrange for the wedding of his youngest daughter. 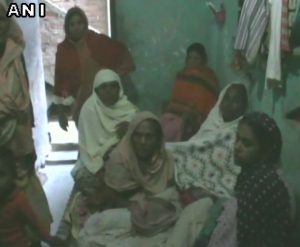 Family of the victim

Jewel Choudhary, a villager who knew Mohammed well, said, was a well-natured man and added that ‘Love Jihad’ has become a tool to kill people.

“What is love-jihad? We don’t know what this term means. All that we can now say is that, it’s an easy word used to justify the killing of someone who is in his fifties, has a wife and is even a grandpa. We know Ifrazul since long, and we are sure of one thing that he hadn’t married any Hindu lady. He was a good man.”

Now, Afrazul’s family is demanding public execution of the attacker. “We want those who killed my husband so brutally and showed it to the world be hanged. I want Insaaf (justice). He was only killed because he was a Muslim. Yesterday, at around 3 pm, we received a call from Rajasthan Police and were told that my husband has been murdered.”

In the bone-chilling video, Mohammed Afrazul, a daily wage earner from West Bengal’s Malda, was attacked and set afire by another man over alleged ‘love jihad’, a term coined by rightwing groups who accuse Muslim men of drawing Hindu women.

In one of the two clips posted online, the accused, Shambhulal, in a red shirt, white trousers and a white muffler, is seen leading Afrazul to a spot in the woods.

According to the police, Shambhulal asked Afrazul for directions. He then follows him and attacks him repeatedly with an axe. Shambhulal looks into the camera and launches into a deranged hate speech, declaring that he killed him to save a woman from ‘love jihad’.