Under the category ‘Political pressure groups and leaders’—which enlists bodies that are “involved in politics, or that exert political pressure, but whose leaders do not stand for legislative election”— the CIA listed both the saffron outfits as militant groups. In the same category, the US Agency also listed the All Parties Hurriyat Conference as a “separatist group”, the Rashtriya Swayamsevak Sangh (RSS) as a “nationalist organisation”, and the Jamiat Ulema-e Hind as a “religious organisation”.

Speaking to InUth, VHP spokesperson and All India Secretary Dr Surendra Jain expressed his annoyance over the recent update. Calling the decision “unfortunate”, Jain said, “They are calling a patriotic organisation a terrorist organisation when they remain silent over the numerous terrorist organisations in India. I think they should come forth with their definition of terrorism.” 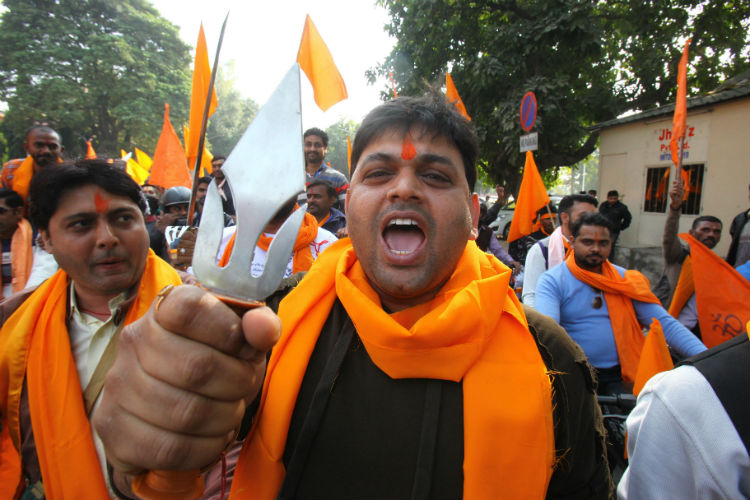 “The CIA is responsible for most terrorist activities around the globe. The way they promoted Jihadis in Afghanistan and Iraq. Their role has always been that of a terrorist organisation. A terrorist has no place calling someone else one,” he added.

Jain confirmed that VHP will take legal action against the CIA to retract the organisation’s name from being listed as a “militant” group. He added that the saffron outfit “will not spare them.”

Recently, members of the VHP vandalised a turnstile gate installed at the western gate of the Taj Mahal in Agra, claiming that it blocked the way to a 400-year-old Shiva temple. Earlier this month, a VHP aide also announced a cash reward of Rs 2 lakh for thrashing Bollywood actor Salman Khan over the title of an upcoming film Loveratri, a nod to the Hindu festival of ‘Navratri’.

The World Factbook is an “annual publication of the Central Intelligence Agency of the United States with almanac-style information about the countries of the world.”