The 10-year-old from Kolkata was allegedly sexually assaulted by her uncle two years back when she stayed with her aunt. After alleged repeated assault by her uncle, Akhter Ahmed, she fled from their house.

Ahmed was arrested in June last year but his lawyer remained firm that the girl’s testimony cannot be taken as ‘competent’ and argued that she has been trained to accuse him of rape. But something unexpected during the hearing turned the case in her favour.

Also Read: To control crime, Agra men aged between 18-30 won’t be allowed to cover their faces in public

In the middle of the hearing, she was given paper and crayons to keep her occupied. What she drew there caught everybody’s attention. With her crayons, she sketched an abandoned house, a girl holding balloons, and a dress lying unattended beside her. The girl also filled gloomy colours in her sketch. 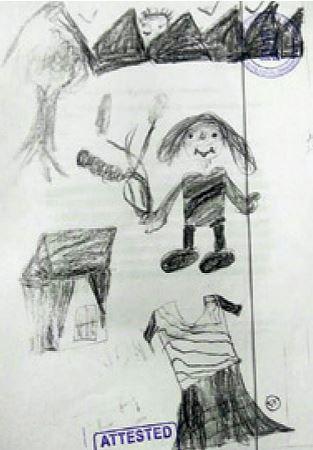 The sketch by the kid (Picture credit: Times of India)

Seeing her sketches, additional sessions judge Vinod Yadav considered that it as the child’s impression of what she faced. As per a report in the Times of India, the judge said that if the elements of this drawing are taken into consideration along with the facts provided for the case, it becomes evident that she was sexually assaulted which has left a lasting imprint on her mind. It was thus that ASJ Yadav decided to consider the child victim to be a competent witness.

Her uncle Akhter Ahmed might have escaped punishment but for the care and rehabilitation, the girl received after she was found in a bus in November 2014.

After the woman of the girl died, she was abandoned by her alcoholic father. She was brought to Delhi by her aunt who made her work at another house. Due to the work that she was made to do and the sexual abuse that she had to suffer, she eventually fled home.