There has been widespread discussion over how the use of Sarahah is mostly creating a negative environment as people in the garb of anonymity have been sending hate messages through the app. There have also been recent incidents where people have received rape threats on the app.

Also Read: Sarahah: Here’s all you need to know about this anonymous messaging app

While there are many who have been criticising this anonymous harassment, a group in Chennai certainly knows how to make the best of it. ‘AWARE’ a Chennai based group which creates awareness on human laws, rights, and gender equality is using the platform to encourage people to come out and speak on the issue of Child Sexual Abuse.

The initiative by AWARE named ‘Save the Smiles’ has been launched with a mission to have open discussions about Child Sexual Abuse and Prevention of the same. Founder of Aware, Sandhiyan Thilagavathy, writes on his Facebook page: Child Sexual Abuse is often the less spoken subject in our Indian family and schooling context, only because of this the issue is rampant and it’s always the abusers gets an upper hand to exploit our little ones. Come, let’s have a candid conversation about the topic!.”

Those who wish to share their stories regarding child sexual abuse can now do so anonymously on savethesmiles.sarahah.com, a page that the NGO has created on the controversial, yet popular app.

“Mission #SaveTheSmiles is available on Sarahah now! Educating ourselves on Child Sexual Abuse will personally empower anyone to prevent this heinous crime. Let’s talk more on Child Sexual Abuse here! Post your queries, share your stories and tell us what would you want to know about CSA! We’ll help you out!,” Sandhiyan wrote in another Facebook post.

Applauding the movie, people on social media are coming out in support of the initiative. 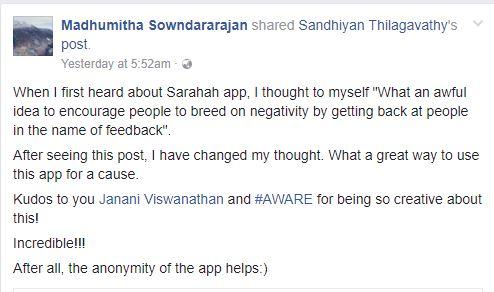 Also Read: Why the anonymous messaging app Sarahah should make us uncomfortable

Since the time when the messaging app introduced in Saudi Arabia, nearly 300 million people across the world have downloaded the app.