Sarahah means honesty in Arabic.  Honesty is supposed to be the best policy. But the expression of honesty usually cannot be a very public affair. We are most honest when we know our honesty will be shrouded in anonymity. So, greater the certainty of anonymity, the more honest we will be. The now viral messaging app Sarahah, which has its origin in Saudi Arabia, is cashing in on this directly proportional relationship between anonymity and honesty. Ever since the founder of the website, Zain Alabdin Tawqif introduced the page with a tweet “Hello India”, several people have registered themselves on the page and downloaded the app. It has almost 300 million users worldwide now. It has become the most downloaded app in the past few days.

People have been sharing the link to their Sarahah page on all social media platforms. They are also sharing screenshots of the answers they have received. Many naysayers have bashed it and expressed their irritation at the frequent updates they are getting from their friends.

Here are some tweets, expressing the same sentiment.

Sarahah? Really? If you have the desire to know everyone else’s thoughts about you anonymously then you need to rethink your priorities.

the sarahah links are annoying if u want a compliment, just ask ur mom to post a pic of u on her facebook & all her friends will hype u up

honestly don’t get the point of this sarahah thing. if you have something to tell someone, why not just tell them…? instead of “scroll up”

Not interested in making a sarahah. If you got something to tell me just tell me or leave me tf alone. Lol

don’t set up a sarahah account & then post a screenshot of the message on your story and ask who said it, beyond annoying

Many also see it as some kind of conspiracy to get hold of private information like email id. Yet others have also called out the platform for being an open playing ground for bullies. After all, anonymity always heightens the nasty in Hon(e)asty.

I personally feel, the threat of private data like an email id exists with all kind of online activities. So that’s not a ground to trash this initiative. The criticism that the app is an open invitation for bullies is also not fair. Because to be honest all social media platforms share this trait. On Twitter, people have full-time jobs of just bullying and trolling someone.

The are bigger and profounder problems with the virality of Sarahah.  The virality of this app is a reflection of this generation’s need for constant validation. This trap of seeking validation from a larger audience, outside your family and close circle of friends began with Facebook’s like button. Posting pictures of our vacations, our weddings, our #WokeUpLikeThis selfie became an addiction. Ever bigger addiction was to go back to those posts and see the number of likes it has garnered. While Facebook over a period of time became a toxic platform of toxic political opinions, many found solace on Instagram. Now you had the option of not only posting your pictures but to brighten them, beautify them with a number of filters. And it was not just your school friends, college friends, colleagues or family members who would be able to see your glamorous avatar. Insta helped you to reach out to a far greater audience and connect with like-minded people. It expanded our universe of “likers” and “lovers”.

This is not to say social media platforms haven’t been used to amplify people’s voice and bring together people on issues that matter. However, the whole Sarahah craze is an extension of this disease of seeking validation from others.

Get honest feedback from your coworkers and friends 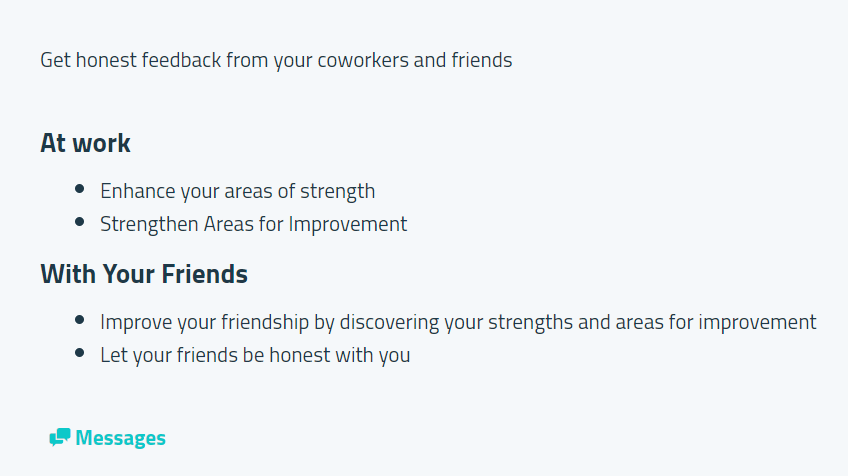 The idea at the outset looks like a constructive one. In fact, while inviting messages, the platform insist that your feedback must be “constructive”.

But anonymous feedback is a tricky ball-game.

Either you will be flooded with fan mails or you will receive unimaginable hatred. Neither is feedback, neither good for our mental well being.

An employee has the liberty of saying something really nasty and hurtful to his boss or team leader. There are facebook pages and closed groups where employees simply go ahead and spew venom against their seniors and employers. But it seldom reaches the concerned people. It’s more like a recreational and de-stressing activity for this bunch.

Sarahah, however, makes it so much more easy to target and hurt the person you hate without any fear of consequence. In civilised world that’s called harassment.

There is an altogether different side to these messages. What I have come across from the deluge of screenshots on my timeline and the experience of half a dozen of colleagues is that the nature of these messages are mostly confined to expressing admiration for a secret crush. Some of these messages almost look like it has been sent by a stalker.

“Smitten by your beautiful kohled eyes,” “I want to date you”, “You have a beautiful smile”, “I stalk you virtually”, “you look gorgeous” — and different variations of these words is what is floating around on every screenshot. We thought this was the stuff of “Other’s” inbox on Facebook. A feedback platform has been turned into something to express secret admiration from anonymous people. This should make us uncomfortable. Instead, we find it absolutely okay to gleefully share these messages on Facebook.

Now look at the flip side. While the words of an admirer may lift our battered self-confidence, the harsh words of a hater will zap us of all your energies. I myself received a mix of two. Someone flattering my cooking abilities, and another praising my dressing sense (and I figured out who these dear friends/seniors are) and yet another calling me a “fat bitch”(that I couldn’t figure out). Although an inconsequential message, it immediately affected me and left me wondering who could it be. I signed up, only because as a writer on current trends and a deadline looming over my head, I had no other choice but to experience it.

Why would any one want to waste their time pondering over even one negative thought? Has our requirement for self-validation become so addictive that we are ready to barter our mental peace for it? Why is it so important for us to know what people think of us? And what kind of impact such a platform could have on a person who is mentally vulnerable, not as thick skinned as journalists, who are used to getting trolled? Isn’t this platform a recipe for disaster for them? What if someone tells them something unverified, use it to  spread rumors and gossips?

Someone on my Facebook friend list was asked a very hurtful question. “Have you been invited to your ex girlfriend’s wedding and what is the gift are you going to give her?” Whoever sent that message definitely didn’t pay attention to the fact that he was supposed to send a “constructive” feedback. Because, it’s not binding you see. You can write any sh%t and get away.

As I finish this story, I logged out of my account and deleted the app. It’s been a tiring 2 hour waiting for messages — admiration and anger came my way and none of it has a name and face. I don’t know what to do with the six odd messages I received. I don’t know what to make of it and how it has contributed to my day. It was anything but a constructive exercise, completely opposite to what the makers of the platform had intended it to be.