A few distressed husbands got together in Karoli village near Aurangabad to burn effigies on Dussehra. However, the sculpture they burnt was not of Ravan, the Lankan king who was defeated by Lord Ram. Instead, they set fire to the effigy of the demon king’s sister, Surpanakha, to purge themselves of the alleged harassment they’ve suffered at the hands of their wives.

Members of ‘Patni Pidit Purush Sanghatana’, an organisation for people who have been allegedly harassed by their wives set fire to the effigy on Thursday evening in an attempt to get rid of the evils plaguing their lives.

“All the laws in India are against men and favour women. They are misusing it to harass their husbands and in-laws over petty issues. We condemn this tyranny against men in the nation. In a symbolic move, our organisation burnt an effigy of Surpanakha on the occasion of Dussehra last evening,” Bharat Phulare, founder of the organisation told PTI. 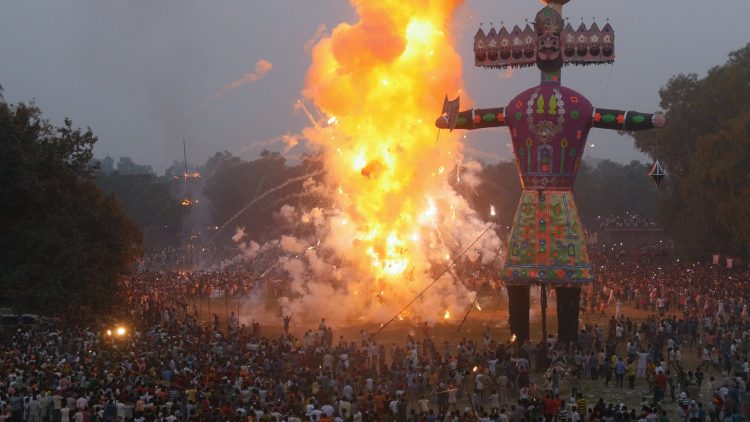 The men burnt Surpanakha’s effigy as in Hindu mythology it is said that she was the reason Ravan and Ram engaged in battle. Ravan apparently challenged Ram in order to seek revenge for insulting his sister. Ravan decided to abduct Ram’s wife Sita while disguised as a hermit. This led to the war between the demon king and Ram.

While a few of the members of Patni Pidit Purush Sanghatana questioned the merits of the #MeToo movement, others pointed out how 74 per cent married men had committed suicide in the country.

In August this year, a group of 150-odd men organised a ‘pishachini mukti puja’ for their estranged wives in an attempt to rid the world of ‘toxic feminism’. Speaking about the ritual, Amit Deshpande — President of men’s rights organisation Vaastav Foundation — had said, “On the ghats of Kashi (Varanasi), our brothers have gathered to conduct the last rites for all the abusive women in their lives, including the women who misuse feminism to harass Indian society. We want to conduct the last rites of the brand of feminism which encourages women-centric laws.”