At the end of their wits with the modern feminist movement, a group of 150 odd men landed at the Manikarnika Ghat in Varanasi, Uttar Pradesh, on August 13. The men dipped themselves in the holy Ganges, conducted a ‘pind daan‘ (last rites) of their troubled marriages and organised a ‘pishachini mukti puja‘ for their estranged wives, in hopes of ridding the world of ‘toxic feminism’.

The men were celebrating the 10th anniversary of the NGO Save Indian Family Foundation (SIFF), a men’s rights organisation. Speaking about the ritual, Amit Deshpande — President of men’s rights organisation Vaastav Foundation — said, “On the ghats of Kashi (Varanasi), our brothers have gathered to conduct the last rites for all the abusive women in their lives, including the women who misuse feminism to harass Indian society. We want to conduct the last rites of the brand of feminism which encourages women-centric laws.”

ALSO READ: ‘Meninist’ Deepika Bhardwaj Has A Few Questions For Feminists In India

He added, “And for all these demon-like feminists who talk of equality but do not practise it, we will conduct the ‘pishachini mukti puja‘ and ‘pind daan‘.” 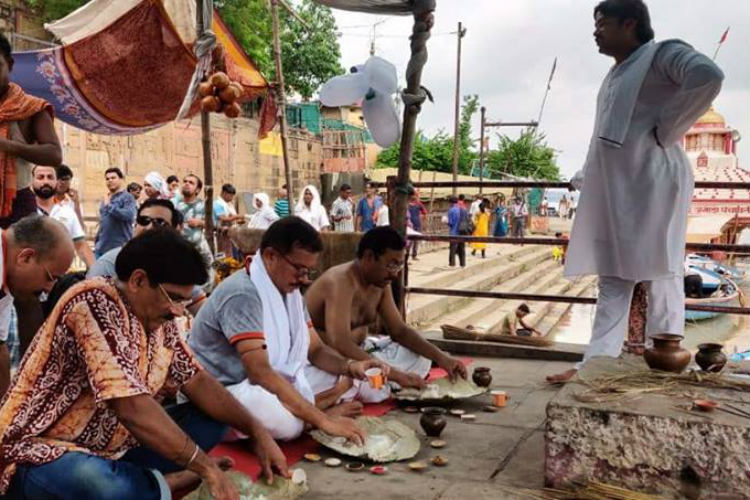 According to Deshpande, India’s dowry and domestic violence laws are biased towards men and are misused by women. He believes that the feminist movement has long deviated from its goal to attain gender equality and is now focused on leading us to a gynocentric society. Hence, this group banded together to appeal to the “highest authority” — Lord Shiva — to help them do away with the “corpses of their marriage”.

Another men’s rights activist at the ritual, Partha TR, said, “What happens to a man stuck in a bad marriage? If there is no divorce, there is no salvation. Every married man in India facing this problem carries a corpse of his marriage for a long time. This corpse and the soul of the memories cannot be dragged forward forever.”