A political row has erupted over Congress vice-president Rahul Gandhi’s visit to Somnath temple in poll-bound Gujarat. The Gandhi scion was reportedly entered as a non-Hindu visitor at the famous temple, prompting BJP to question his faith and Congress to allege conspiracy.

What the BJP said

BJP leader and Rajya Sabha MP Subramanian Swamy immediately targetted the congress leader saying Gandhi “is a Christian and that he goes to church every Sunday.”

BJP spokesperson Sambit Patra demanded that the Congress Vice President should come clear on the issue.

Why should there be a secretive air around Rahul Gandhi? He is one of the most important political person in Indian scenario. For Rahul Gandhi and Congress, religion is a matter of convenience and not devotion. Rahul Gandhi must answer this.: Sambit Patra, BJP Spokesperson pic.twitter.com/iEmdR2Osyo

Meanwhile, the Congress party went on an overdrive to defend Rahul Gandhi.

Congress leader Deependra Hooda accused the ruling BJP of circulating a “fake page” to discredit their leader. He produced a screenshot of Rahul Gandhi’s handwritten note in the visitors’ book as proof that he never listed himself as non-Hindu, that the writing was not his. 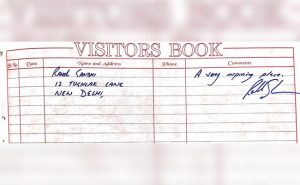 “Everyone knows Rahul Gandhi is a shiv bhakt (devotee). The BJP is doing what it does best, diverting from real issues,” said Mr Hooda, holding up Rahul Gandhi’s signature.

Entry to the temple has been traditionally barred for non-Hindus. Visitors from a non-Hindu background are required to take special permission from the temple authorities. 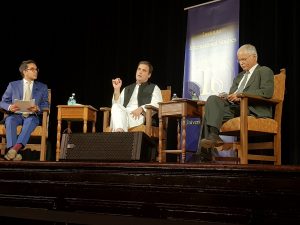 “We have no qualms in saying that Rahul Gandhi is a Hindu. Not only is Rahul Gandhiji a Hindu, he is a ‘janeu dhari’ Hindu. BJP should not bring down the political discourse to this level,” Congress spokesperson Randeep Surjewala told NDTV.

“His sister got married in a Hindu ceremony and Rahul Gandhi conducted the last rites of his father according to the Hindu tradition,” Surjewala added.

Speaking to The Indian Express, secretary of Shree Somnath Trust, Pravin Laheri, said: “We have a rule that all non-Hindus have to register their names. Somebody entered the names of Ahmed Patel and Rahul Gandhi in this register. The temple has nothing to do with it.”