Recently, a picture of a resignation letter which bore Solanki’s alleged signature went viral on social media. The letter was addressed to Congress President Sonia Gandhi. According to the letter, Solanki had applied for resignation as he was frustrated with the party’s actions of late, with the Gujarat polls due next month. The letter also claimed that Congress Vice-President was being ill-advised and party tickets were being sold to undeserving candidates.

Here is a picture of the letter that has been doing the rounds on the internet: 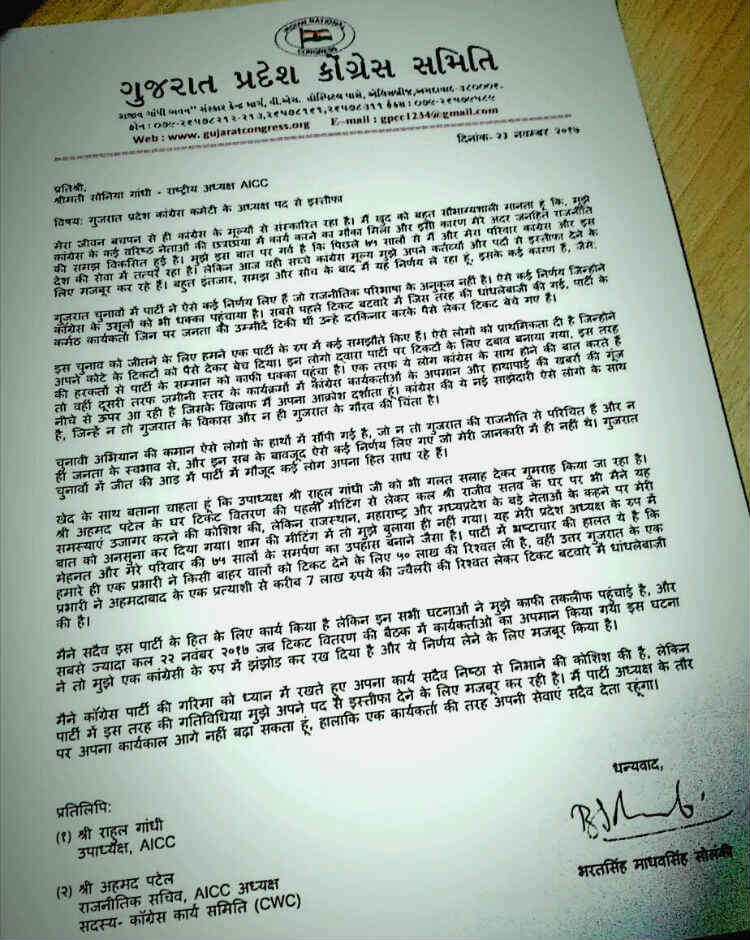 ALSO READ: Gujarat elections are just a month away and we are discussing Hardik Patel’s sex life. Why?

The letter is fake and is a mischief played on the Congress party. We will register a complaint before the Election Commission against this.

While speaking to PTI, Solanki denied having resigned from his position and expressed his loyalty to the Congress party. He said,

I am loyal to Sonia Gandhi and Rahul Gandhi and the question of my resignation does not arise.

Solanki went on to blame BJP for the emergence of the “fake” resignation letter and blasted the party for “spreading lies on social media.” He added,

The writing on the wall is very clear as 22 years of BJP’s misrule has disappointed all sections of the society as wrong claims of development have failed to convince the people of Gujarat.

BJP is nervous and rattled by the surging popularity of Congress and as people of all sections are coming together to root out anti-people govt, out of sheer desperation they are spreading such lies on social media to deflect from the real issues.

ALSO READ: A new chamber, special welcome: How Mukul Roy is the new cool dude in BJP office in Bengal