The masala quotient of the story goes up by multiple folds when the person at the centre of the alleged act is a political personality and seems to have the power to tilt vote count by shifting loyalties of a certain community. No points for guessing that the person being talked about here is Patidar leader Hardik Patel, who had whiffed that a sex tape involving him was on its way ten days back.

Patel has been a cause of much headache for the BJP, ever since his arrival on the political scene with the tumultuous Patidar agitation.  Now that the tape has surfaced, Patel hasn’t really helped his cause. His statements have ranged from something as ludicrous as  “I am a man, I am not impotent.” to the more obvious and safe defences like “this is morphed”. His response has also been confusing given he claimed his opponents have targeted his private life while claiming it’s a doctored video. He also termed this leak as a dirty trick by BJP.

Now, let’s get into the facts of the matter. To begin with, it is unknown who has leaked the video, who put up a spy cam in that hotel room, and if it is a morphed video, who morphed it? All of these are punishable crimes under various sections of the IPC and the IT Act.

What, however, is bizarre that how political opponents believe that such a mischief could spell the death knell for a person’s political career. Even if the person in that video is actually Hardik Patel and not an impostor, why should it interfere with his fight for Patidar reservation in the state?

Look at some of these reactions on social media. 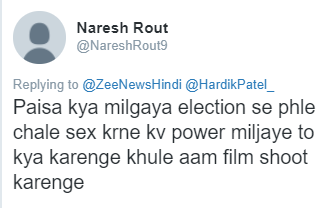 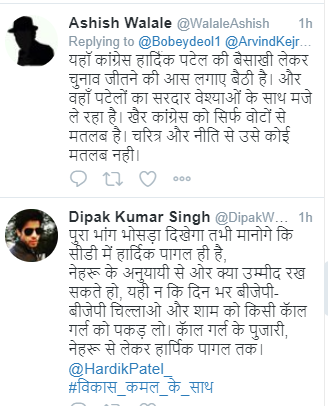 Now, these tweets not only try to put Hardik’s personal choices as an individual under the spotlight, they also slut shame the woman in the video.

A former PASS convener Ashwin Patel accuses Hardik of sexually exploiting girls. “I separated from Hardik as he exploited several girls, including a Patidar one. Hardik’s aides from Surat, Morbi and Rajkot also exploited girls,” he was quoted as saying by the Times of India.

After the alleged sex tape, another video of Hardik drinking alcohol in the dry state of Gujarat is doing the rounds.

This is not the first time that a political personality has been targeted for his sex life or other personal choices.

Right before the Punjab elections in 2012, then deputy chief minister Sukhbir Singh Badal targeted Congress’ Capt Amrindar Singh for “roaming around with women from across border.” While the main issues in Punjab elections were those of drug addition among youth, farm crisis and unemployment.

When former JNUSU President Kanhaiya Kumar rose to prominence following the February 9 incident , his picture in a “woman’s arms” went viral. It was shared with captions like “Kanhaiya ki sachchai” while claiming that he was “caught in an intimate moment” with his teacher. The truth was something else altogether. First of all, the picture had nothing “obscene” in it. Second, the woman in the photo was not a JNU teacher but a fellow research scholar. And finally, the woman in question had herself uploaded the image.

Such attempts at maligning the image of a political opponent by bringing their sex life under public scrutiny is not only juvenile and reeks of moral policing but also expose how we look at sex as a society – a forbidden fruit, as if public life cannot go hand in hand with an active sex life. But more importantly such unwarranted focus on people’s private lives only deviates our attention from the real political issues. With just a month to go before Gujarat Elections, should we really be talking about Hardik Patel’s sex life or debating where he gets his alcohol from?

The real debate is whether prohibition on alcohol at all worked for Gujarat, when scenes like thise are frequent.

#Gujarat: Car illegally carrying liquor met with an accident near Dumad in #Vadodara; villagers pounced on the car to loot the cans. pic.twitter.com/llbRIEtTB3

These images are problematic at many levels and it is  the government’s policies that need to be questioned, not the drinking habits of an individual. This is just one example of misplaced priorities.  By trivilising the political discourse in a poll-bound state, we lose the only opportunity to hold the state responsible for its actions.