The Narendra Modi government on Thursday, December 28, tabled the Triple Talaq bill, which makes instant divorce a non-bailable offence, in Lok Sabha. Though the proposed bill has been welcomed by BJP and its allies, a section of the opposition leaders have strongly opposed it saying that criminalising instant Triple Talaq will be counter-effective.

Senior Congress leader Salman Khurshid has voiced his opposition to the proposed bill asking as ‘how criminalising the practise would benefit the woman’.

“When something has already been declared by the courts not to exist, has no legal bearing, why punish someone more in attempting that action?” India Today quoted Khurshid as saying.

Expressing hope that his party would also support his stand, the former external affairs minister said, “I don’t think we can support it because they didn’t made us understand how this criminality of Triple Talaq will benefit women. If someone is lodged in prison as a punishment for saying Triple Talaq, who will take care of his family.” 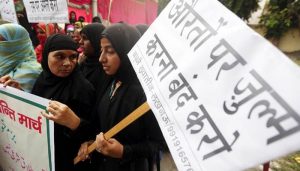 Notedly, Muslim Women (Protection of Rights of Marriage) Bill 2017 makes instant Triple Talaq a non-bailable warrant with imprisonment of up to three years in jail.

While the Congress has lent conditional support to the bill, few other opposition parties like the AIMIM and Biju Janata Dal have called the legislation an “injustice to Muslim women.”

The leader of Congress party in Lok Sabha Mallikarjun Kharge said, “Send the bill to the standing committee. All party people will be present there. Give some time, an elaborate consultation of the bill needs to take place.”

Expressing his opposition to the bill, Biju Janata Dal MP Bhartruhari Mahtab said, “This bill is flawed, there are many internal contradictions in the Bill.”

Also Read: Even after SC voids triple talaq, this woman was divorced over phone

I have given a Notice to oppose the introduction of Muslim Women (Protection of Rights on Marriage Bill) 2017 under rule 72 in Lok Sabha pic.twitter.com/YvLl1ntcqh

However, Law Minister Ravi Shankar Prasad, who tabled the bill in Lok Sabha, categorically said,”This law is for women’s rights and justice and not regarding any prayer, ritual or religion.”