Following Prime Minister Narendra Modi’s delayed response over the Kathua and Unnao rapes, Congress President Rahul Gandhi has demanded further explanation from him on Friday. Modi and several members of the ruling party had refused to comment on the rapes of the two minors, one in Jammu and Kashmir and the other in Uttar Pradesh. Both the rape cases were heavily politicised and triggered a nation-wide outrage.

The Prime Minister had on Friday, assured that “no culprit will be spared,” expressing his shame over the two rape cases. Later on Friday evening, the Congress President took to Twitter, thanking the PM and saying that “India wants to know” when will justice be served.

Thank you for breaking your long silence.

You said “our daughters will get justice”.

Addressing a crowd at the inaugural ceremony of the Ambedkar memorial in New Delhi, Modi had briefly mentioned the recent happenings saying, “Incidents being discussed since past two days cannot be part of a civilised society. As a country, as a society, we all are ashamed of it.” He added, “I want to assure the country that no culprit will be spared, complete justice will be done. Our daughters will definitely get justice.” 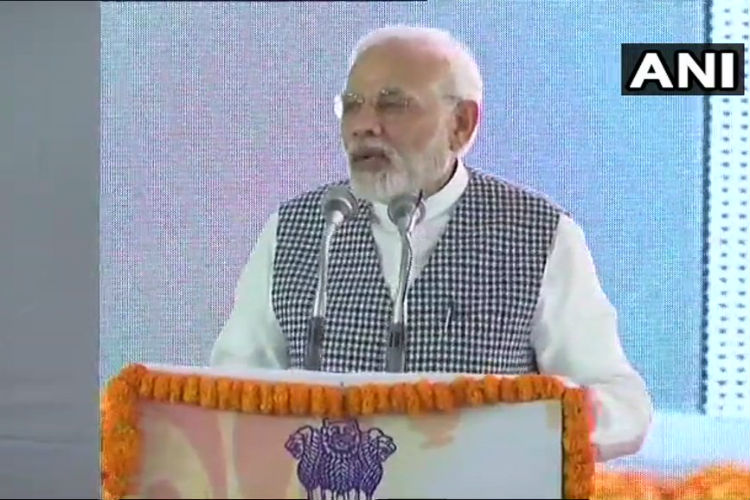 Narendra Modi speaking at the inauguration of Ambedkar memorial in New Delhi on Friday.

Congress spokesperson Abhishek Manu Singhvi too seemed unimpressed with the brief acknowledgment of the rapes, demanding “some serious action.” Singhvi said, “We are very very thankful that the Prime Minister has spoken at least..even if he has done it after three months, after weeks of Unnao, even if he has spoken at the demand and insistence of the opposition parties like us.”

“I wish he will now convert his words to deeds. We want him to take some serious action,” he said.

The Prime Minister had not commented on the rape and murder of an eight-year old girl in Kathua, Jammu and Kashmir, back in January. The brutal rape of the victim, who belonged to a Muslim nomadic tribe, was followed by protests by Hindu outfits in the state, which demanded the release of one of the accused. Modi’s reluctance to acknowledge the Kathua case and the Unnao case, where a 17-year-old had accused BJP MLA Kuldeep Singh Sengar of rape, also fueled tensions across the nation.

Speaking to reporters, Singhvi added, “Deeds count, words do not. The mentality of the RSS, BJP, PM and the government is anti-Dalit. Their thought, deed, their thinking process, actions, policies and approach are all anti-Dalit.” 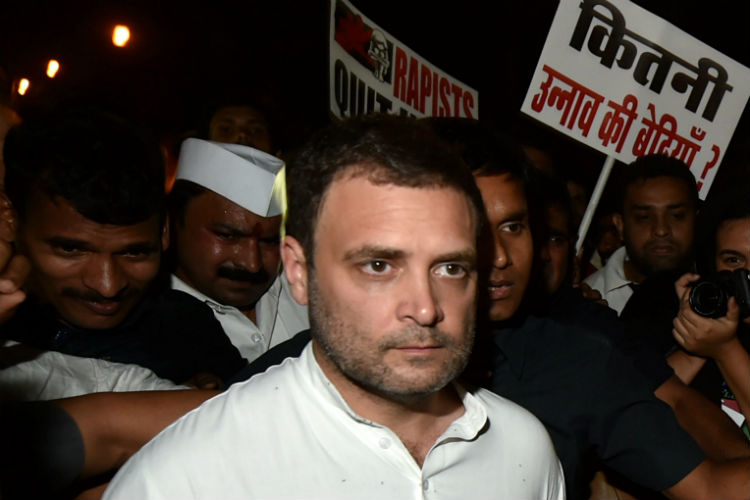 Congress President Rahul Gandhi takes part in a candlelight vigil at India Gate to protest against the growing incidents of violence against the girl child and women, in New Delhi on Thursday late night. (Courtesy: PTI/Arun Sharma)

“Mere slogans and jumlas will neither prevent, nor reduce Unnaos and Kathuas. For Dalits you can inaugurate as many memorials as you like, but the fact of the matter is you are reducing sub-plans, financial allocations, robbing them of their scholarships, you are particiapting in conspiracies to dilute their reservation and then you are shedding crocodile tears in the name of Dalits,” he said stating that Modi “didn’t give Babasaheb Ambedkar due respect.”

ALSO READ: After Kathua and Unnao, ‘Beti Bachao’ Feels Like An Apocalyptic Threat

Before Modi, BJP national spokesperson Meenakshi Lekhi addressed the Kathua, Unnao rape cases at a press conference on Friday. Calling it an “an inhuman act” deserving of “harsh punishment,” Lekhi also attacked the Congress party and the media. “You see their (Congress’) plan: first shout ‘minority, minority’, then ‘Dalit, Dalit’ and now ‘women women’ and then try to somehow fix blame of state issues on the Centre. All this while ignoring the strict action being taken by state governments,” Lekhi said.

Accusing the media of selective coverage, Lekhi also brought up the rape and murder of a 12-year-old student in Assam’s Naigaon village in March, asking, “Doesn’t this case warrant the national media’s attention like the Unnao And Kathua cases?”

BJP President Amit Shah was also questioned about the Kathua and Unnao rapes on Thurday. However, Shah dodged a question saying that he “won’t speak on this matter on the street.”